Ch is a complete C interpreter that supports all language features and standard libraries of the ISO C90 Standard, but extends C with many high-level features such as string type and computational arrays as first-class objects.

Interactive and Interpretive Execution Of C/C++ Functions and Programs

Not only C statements and expressions, but also C functions and programs, can be interactively executed in Ch. All functions in the C Standard Libraries can be executed interactively and used inside user-defined functions. For example, in Example 2, the random-number generator function rand() is seeded with a time value in srand(time(NULL). Function add(), which calls type-generic mathematical function sin(), is defined at the prompt and then used.

If file addition.chf is located in a directory specified in _fpath, function addition() can be used inside a program or command line:

All functions, including function main(), in C are at the same level; functions cannot be defined inside other functions. In other words, there are no internal procedures in C. Ch extends C with nested functions.

A function can define other functions inside itself. For example, the nested function nestedfunc() defined in Listing Two can be executed interactively as follows:

where function innerfunc() is defined inside function nestedfunc(). With nested functions, details of one functional module can be hidden from the other modules that do not need to know about them. Each module can be studied independent of others. Software maintenance is the major cost of a program. People who were not involved in the original design often do the most program maintenance. Nested functions modularize a program, thus clarifying the whole program and easing the pain of making changes to modules written by others. Nested functions are useful for information hiding and modular programming. They are complementary to data encapsulation in object-oriented programming in C++. In some applications, using nested functions is simpler than using member functions of classes.

Classes and some other C++ features are also supported in Ch for interactive execution of C++ code, as shown in Example 3.

Example 3: Some C++ features are supported in Ch for interactive execution of C++ code.

C/C++ programs can also be executed interactively without compilation. For example, to run the program hello.c in Listing Three, one can type the command hello.c in a Ch command shell to get the output of "Hello, world":

Ch finds executable commands in directories specified in the system variable _path. From other command shells, program hello.c can be executed in Ch without compilation, as follows: 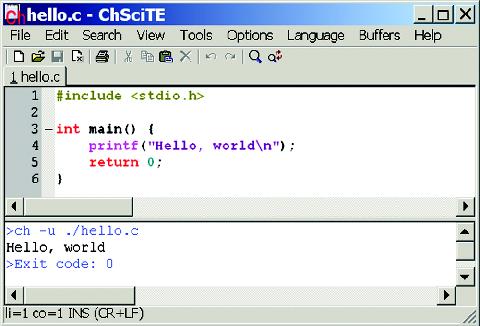 To speed up interpretive execution of a C program, one should try to avoid loops in the program. For scientific numerical computations, one can use computational arrays for fast execution of algorithms with arrays. Alternatively, the code that is computationally intensive in a script program can be compiled as a binary module. In general, you may find it is necessary to interface binary modules in the following situations:

The Ch SDK provides a utility to generate wrappers for Ch to interface C/C++ libraries automatically. Ch SDK has been effectively used to interface with Standard C Libraries such as POSIX, X11/Motif, Win32, GTK+, OpenGL, and ODBC.

The interpretive execution of C functions and programs is ideal for rapid prototyping. Programs can first be developed and tested in Ch. Later, the same code can be compiled in a C or C++ compiler for final production. Applications with tens of thousands of lines using functions in libraries such as POSIX, X11/Motif, Win32, GTK+, OpenGL, and ODBC can also effectively run in Ch.

The program compilation presents a serious problem for real-time manipulation of mechatronic systems. For real-time mechatronic systems, the external environment may be different at each execution, so the testing scenario may not be repeatable. During debugging and testing, it is impractical to restart a program from the very beginning every time a change is made or a problem is diagnosed. Ch is time deterministic. It can be used for control of mechatronic systems such as robotics. In a typical real-time application in RTLinux, a hard real-time module runs in the Linux kernel; Ch runs in the user space and communicates with the real-time module through interprocess communication such as FIFO.

The interpretive execution of C programs is especially suitable for interactive presentations using a laptop in a classroom with a quick response. With an interactive computing environment, instructors can relieve themselves from tedious compile/link/execute/debug cycles, and focus on teaching the knowledge and problem-solving skills. All sample code in a textbook for teaching computer programming in C can readily run in Ch without modification.

Ch is especially suitable for developing web-based interactive content in engineering and science for general applications and distance learning. For example, web-based design and analysis of control systems and mechanisms have been developed and they are available online at http://www.softintegration.com/ webservices/. The shopping cart on this site was also developed in Ch.

Ch is a complete C interpreter. It supports most new features added in C99 and classes in C++. Ch is embeddable in other applications as a C/C++ scripting engine. It is ideal for cross-platform scripting, shell programming, 2D/3D plotting, numerical computing, and embedded scripting. C/Ch/C++ allow users to use one language, anywhere and everywhere, for any programming tasks. Ch lowers the barrier for system programmers to do scripting. Whether you are a novice computer user or experienced C/C++ programmer, I hope that Ch will make your programming tasks more enjoyable.

I would like to thank Tom MacDonald for his suggestions and comments on this article.

Harry H. Cheng is a professor and director of the Integration Engineering Laboratory at the University of California, Davis. He is the Chief Architect of Ch, an embeddable C/C++ interpreter for script computing. He can be reached at [email protected]