It is reasonably simple to roll your own state machines, depending on how generic you want to make the engine. A switch statement and a state variable can do the trick.

Last time I discussed state machines and how they could make embedded systems — at least some of them — much simpler to create and maintain. Of course, you could argue that nearly all programs (and most CPUs) are already state machines. But I am thinking more about representing them as state machines to start with, not describing the behavior of a bunch of ad hoc statements with a state machine after the fact.

There are plenty of tools around to help you. The popular Boost library, for example, has a state machine library (statechart). There are other tools that are more flexible with languages (such as Ragel). Look for more on some of those in the future. It is reasonably simple to roll your own state machines too, depending on how generic you want to make the engine. A switch statement and a state variable can do the trick.

I have a small library I wrote that I often pull out when I need something simple and I'm using C++. You could adapt the same ideas to C or Java, of course. To use it, you simply include state.h, which gives you a base class called statemachinebase. You can then derive a class to handle your special requirements for input and output. You can also add your states and your state transitions to the base class' tables easily.

In my previous blog, I talked about a traffic light. The state diagram is below, so you don't have to go find it in the last blog. 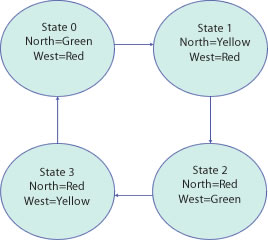 Using the library to build the traffic light requires just a few items in the derived class:

The state IDs make the code readable and that’s easy:

Recall from my last post that a "one hot encoding" uses a single bit for each state. This is clearly using that scheme. Just as an aside, many hardware state machines modify the one hot strategy so that the initial state is 0. This is easy to detect and is the default value for the state variable, so it saves hardware that would only initialize the variable. Plus it gives you one extra possible state (that is, a byte can hold 9 one hot states, if 0 is a legal state). The traffic light is a "pure" one hot representation.

The timer system is just a few functions that set up a UNIX-style signal to fire every second and maintains a countdown timer. When the timer expires, the state machine sees a "1" input. Of course, the signals are going to occur at exactly one second, but for a simple traffic light, no would notice a few seconds of slack either way. Naturally, in a real system you might have other kinds of events that require a more precise timer, but you can do anything your hardware will support. The library just cares that some input is readable for all the events that cause a transition. Additionally, when a state becomes active, the timing is automatically set. A short time delay occurs when a yellow light is active, and a longer time passes for a green light.

By default the library uses integers for input and output. The traffic light has to modify the input, but it uses the output integer as-is, assuming that the low byte of the output represents 6 different outputs. The byte has the pattern:

Where X is an unused bit. The R, Y, and G bits are red, yellow, and green. One pair of lights (e.g., North/South) is numbered with a 1 and the other pair is numbered with a 2. Of course, real traffic lights that use incandescent bulbs preheat filaments, but I ignored that here. Besides, I don't think I have to preheat LEDs, so let's stick with that.

If you look at the state diagram, there are 4 states. I am using the Moore model, so each state has an output associated with it. Here's the code that sets up the states:

The 0x77 is the output mask. Only the bits in the mask will be modified. The second number is the output colors as described above.

Finally, you need the state transitions:

That's it. The ~0 in the transition table just makes a mask with all 1 bits. The traffic light uses one hot encoding, so you can match all the bits safely. The only thing left is to write a main function that creates the traffic light object and then calls the Process method (provided by the base class) repeatedly.

I glossed over some details, of course. You can find a slightly improved version of the entire program here. It shows how easy it is to modify a table-driven state machine. The entire program assumes that there are two buttons pedestrians can use to request the light to change their way. This requires just a little code in the input function to represent the buttons as 2 and 4 (recall that 1 is the time expiration).

To take advantage of the buttons, the state transition table changes:

Granted, this traffic light is pretty generous to pedestrians because it immediately forces the green side to yellow when you press the button, but you can easily modify it to, say, shorten the current cycle instead of just ending it. That's the point. It is easy to change the behavior by adding new states and transitions.

The entire traffic.cpp and traffic.h files might look a bit bloated at first. But if you examine the code carefully, you'll see that most of it is simulating the button pushes and doing easy-to-read printing of states and time delays so you can see what's going on. A real traffic light would actually be simpler!