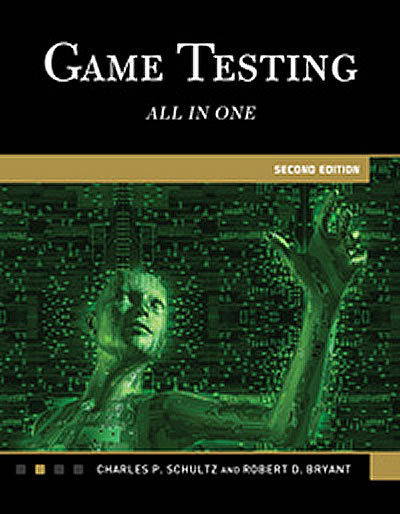 Game Testing All In One, 2nd Ed.

There is one thing about game testing that is radically different from regular app testing: Its intensely pragmatic focus. All game testing cares about is what you test and how. Long digressions on the differences between unit test, integration tests, and UATs as well as configuring them to run on CI platforms are dreadfully off-target. The principal question is how to run enough different scenarios to assure yourself that the game is thoroughly tested. This book dives into this area and comes up with formulas for generating the minimum number of test cases using combinatorial factors and test flow diagrams. It also shows how to write and run the tests, do walkthroughs, use quality checklists, and assess this data in the context of an overarching QA plan.

Ad hoc testing, gameplay testing, capture and playback are also explained. Finally, the authors show how to put these tests and test results into a regression suite for subsequent reuse. There is no doubt that the techniques illustrated here are useful to mobile developers in non-game contexts; that is, as part of the testing of straight UI interaction. The book is entirely hands on, it rings of the authors’ experience, and is eminently readable. In all important ways, a breath of fresh air in the literature on software testing. Highly recommended. — Andrew Binstock