Like most things in life, taking the time to plan ahead when building a Web service can help in the long run.

Open source software has become a fundamental building block for some of the biggest websites. And as those websites have grown, best practices and guiding principles around their architectures have emerged. This article seeks to cover some of the key issues to consider when designing large websites, as well as some of the building blocks used to achieve these goals.

This article is largely focused on Web systems, although some of the material is applicable to other distributed systems as well.

What exactly does it mean to build and operate a scalable Web site or application? At a primitive level it's just connecting users with remote resources via the Internet — the part that makes it scalable is that the resources, or access to those resources, are distributed across multiple servers.

Like most things in life, taking the time to plan ahead when building a Web service can help in the long run; understanding some of the considerations and tradeoffs behind big websites can result in smarter decisions at the creation of smaller Web sites. Below are some of the key principles that influence the design of large-scale Web systems:

Each of these principles provides the basis for decisions in designing a distributed Web architecture. However, they also can be at odds with one another, such that achieving one objective comes at the cost of another. A basic example: choosing to address capacity by simply adding more servers (scalability) can come at the price of manageability (you have to operate an additional server) and cost (the price of the servers).

When designing any sort of Web application it is important to consider these key principles, even if it is to acknowledge that a design may sacrifice one or more of them.

When it comes to system architecture there are a few things to consider: what are the right pieces, how these pieces fit together, and what are the right tradeoffs. Investing in scaling before it is needed is generally not a smart business proposition; however, some forethought into the design can save substantial time and resources in the future.

This discussion is focused on some of the core factors that are central to almost all large Web applications: services, redundancy, partitions, and handling failure. Each of these factors involves choices and compromises, particularly in the context of the principles described previously. In order to explain these in detail it is best to start with an example.

At some point you have probably posted an image online. For big sites that host and deliver lots of images, there are challenges in building an architecture that is cost-effective, highly available, and has low latency (fast retrieval).

Imagine a system where users are able to upload their images to a central server, and the images can be requested via a Web link or API, just like Flickr or Picasa. For the sake of simplicity, let's assume that this application has two key parts: the ability to upload (write) an image to the server, and the ability to query for an image. While we certainly want the upload to be efficient, we care most about having very fast delivery when someone requests an image (for example, images could be requested for a Web page or other application). This is very similar functionality to what a Web server or Content Delivery Network (CDN) edge server (a server CDN uses to store content in many locations so content is geographically/physically closer to users, resulting in faster performance) might provide.

Other important aspects of the system are:

Figure 1 is a simplified diagram of the functionality. 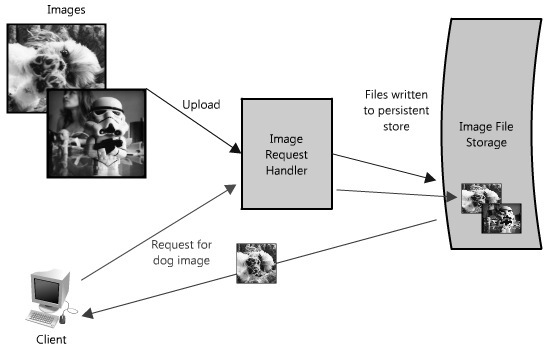 In this image hosting example, the system must be perceivably fast, its data stored reliably and all of these attributes highly scalable. Building a small version of this application would be trivial and easily hosted on a single server; however, that would not be interesting for this article. Let's assume that we want to build something that could grow as big as Flickr.