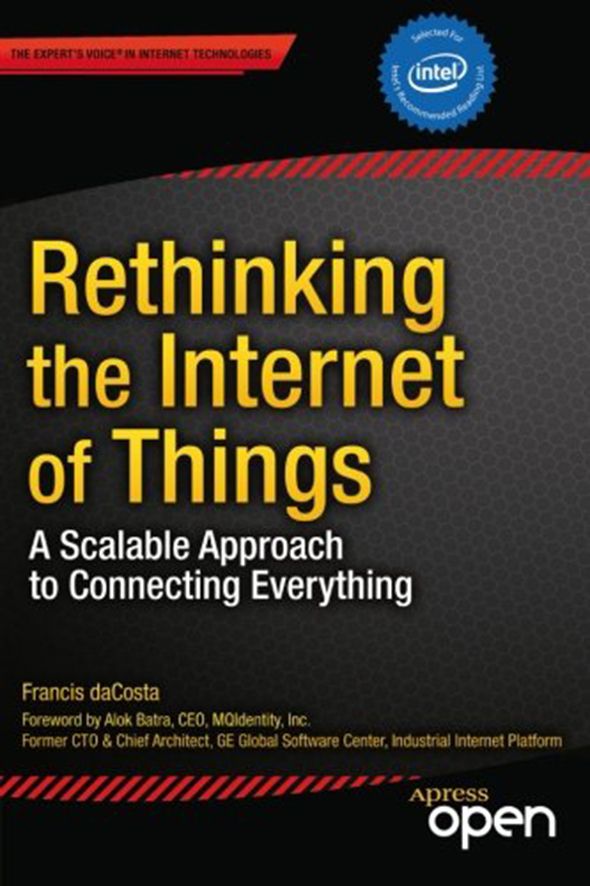 The Internet of Things (IoT) is coming. This book investigates in surprising depth the consequences of having billions of sensors and actuators interconnected and communicating, and what the architecture and networking will need to be. The main contention is that existing IP-based networking is too big, cumbersome, and complicated for the myriad small devices that will be the principal end devices of the IoT.

Instead, a very simple "chirp" protocol will more likely be used by often minimal, low-powered, and only intermittently connected devices. Consolidating this data and routing it to its target (called integrator function in the book) will require a network of propagator nodes that will perform some filtering, aggregation, and batching of chirps — leading eventually to packaging them in standard TCP/IP packets to send them onto the existing Internet.

This scenario, which keys off current business uses of IoT-like technologies, seems far more likely than the scenarios that dominate the consumer narrative of extensive data packets being routinely streamed from all sorts of devices in the home to keep the otherwise uninformed individual up-to-date on every aspect of his household's state.

The author is a thinker and practitioner who has a lot of real-world experience in building massive distributed systems, embedded software, etc. While this is more of a technology treatment, rather than a programming volume, I found myself nodding in agreement as I read many of the concepts and ideas. Nonetheless, I have some doubts about a few of the dynamic properties of the IoT presented here, such as an emergent self-organizing network of propagator nodes and a combination of public and private markers used for generic filtering and routing.

Overall, Rethinking the Internet of Things is a very deep and detailed book that explains clearly an emerging field, which will become a major part of computing — and if IoT is of interest, it's a thoughtful explanation that removes the hype, presents what's likely to emerge first, and sketches out how it will function.