Engineers Without Borders are Chaning the World

Engineers Without Borders is an international humanitarian aid organization that mobilizes volunteer professionals to solve critical problems in the developing world.

In Dreams from My Father, Barack Obama describes his visit to a hut in Kenya: "It was a cramped, pitch-black space with a five-foot-high ceiling. The woman told me her family cooked, slept, and kept newborn calves in it. The smoke was blinding, and after a minute I had to leave..."

Sometimes the needs of people in developing countries are immediate and immense: a tsunami strikes Indonesia, a drought hits East Africa. But in many villages in the developing world the greatest need is for some mundane piece of technology that we would take for granted in the developed world, like a solar-powered well for an African village with neither electricity nor clean drinking water. Sometimes it's just a stove that doesn't pollute the hut.

University of Washington Forest Resources Professor (and civil engineer) Susan Bolton took a team of engineering students to Yanayo, Bolivia, to tackle the stove problem: "After a reconnaissance mission to figure out the engineering problem—creating cheap, locally available stoves and chimney-safe roofs—her team returned for four weeks to complete the job and train residents." Bowen's project, described by Mike Lewis in a Seattle Post-Intelligencer story this spring, was a good example of the work done through a remarkable organization called Engineers Without Borders (EWB). Sustainability is the name of the EWB game: "At any given site...engineers must become clever to build something that can be duplicated and maintained locally." 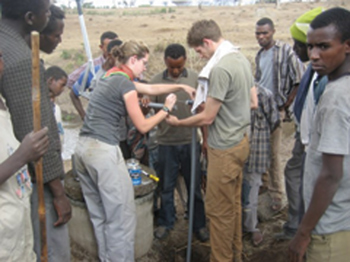