The Numerical Algorithms Group (NAG) has updated its standard-conformant error-checking Fortran Compiler to release 5.3 together with the associated NAG Fortran Builder development environment for Microsoft Windows.

NAG says it has incorporated a large number of Fortran 2003 into the new release and some Fortran 2008 language features as well. We also see the addition of the most commonly used features of OpenMP 3.0. 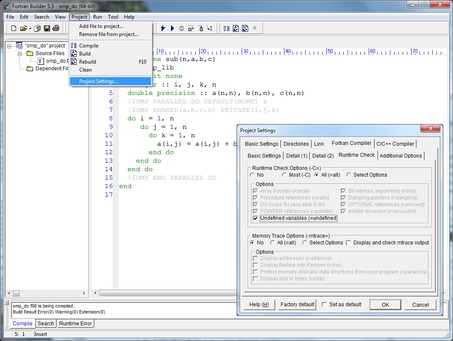 Informative, Rather Than Cryptic

NAG boasts openly about the checking functions available inside the Fortran Compiler. These compile time error messages help developers ensure that code complies with the ISO/IEC standard. Messages are "informative rather than cryptic" and contain context information to assist precisely in identifying the error and rectifying code.

Available as a command-line application under Linux and Mac OS X, the NAG Compiler is included within an IDE under Microsoft Windows and is said to be "well suited" to teaching and for those programmers wishing to update their skills to the new language.

A lecturer in mathematics at the University of Loughborough, Dr. Ian Thompson, offered an independent view: "Having been involved in testing the release candidate, I have found that the NAG Compiler now offers better support for modern Fortran language features than other available compilers".