Boston-based Rethink Robotics has launched its Baxter Research Robot, a humanoid robot with two arms powered by a dedicated SDK designed to allow researchers to create an array of custom applications for robots.

The Baxter Research Robot runs on ROS, the global Robot Operating System standard. ROS is in fact built to give researchers the ability to share innovations and build on each other's work.

The Baxter Research Robot is recommended by the National Robotics Initiative (NRI) as a research platform suitable for funding proposals. Designed to work side by side with technicians and researchers without safety cages, the Baxter Research Robot is available for $22,000, which includes a service plan plus built in sensors such as cameras, force, sonar and rangefinder.

"Universities and other research labs are now able to purchase a fully functional research robot and then use their creativity and programming skills to create never before seen applications," said Rodney Brooks, founder, chairman and CTO of Rethink Robotics.

The SDK will enable researchers to focus on what its makers say are "fundamental goals" such as object manipulation, human-robot interactions, collaborative robotics, robot adaptation to changes in its environment, and arm trajectory planning.

"Robot application development could potentially go viral the way software did for PCs and mobile apps did for smartphones," said Scott Eckert, president and CEO of Rethink Robotics. "The Baxter Research Robot's hardware and software platform can be extended in limitless directions through new software applications. This opens up the potential for an enormous and exciting new industry in creating apps for robots." 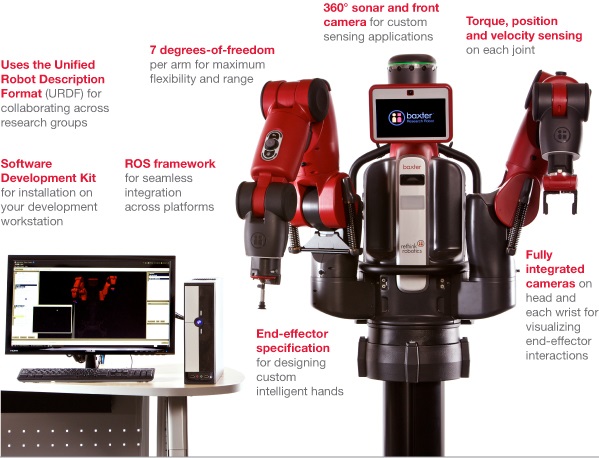