An Eclipse-Based IDE For Composite Applications

The latest release of WSO2 Developer Studio is now available as a standalone Eclipse-based product and as a set of Eclipse plug-ins. The enterprise middleware company says it will address the challenges faced when deploying composite applications and web services both in the datacenter and in the cloud.

This developer environment offered here features an IDE designed for application deployment on servers, in the cloud, or in a hybrid environment. As of this March, WSO2 Developer Studio 3.0 and 3.1 have arrived with application development and integration streamlining through the WSO2 Enterprise Service Bus (WSO2 ESB). New features include a WSO2 ESB Graphical Flow composition tool, WSO2 ESB REST API support, and WSO2 ESB Task support.

With WSO2's IDE, developers can create a Carbon Application (C-App) that includes services running on multiple WSO2 servers — for example WSO2 ESB, WSO2 Governance Registry, and WSO2 Application Server. After it is tested, the C-App then can be deployed into production on servers or in the cloud using a WSO2 Carbon Archive (CAR).

WSO2 vice president of engineering Samisa Abeysinghe says that WSO2 Developer Studio 3.0 enhances support for a nested architecture with Eclipse. This addresses one of the top architectural issues in Eclipse by enabling developers to create Eclipse projects within another project to provide flexible project structures. Using WSO2's IDE, users can maintain the same view of how the projects are organized in the file system from Eclipse, as well as the normal flat project structure view supported by Eclipse, irrespective of the project structure in the file system. WSO2 Developer Studio achieves this by creating filters that work with Eclipse, which WSO2 will be contributing back to the Eclipse project. 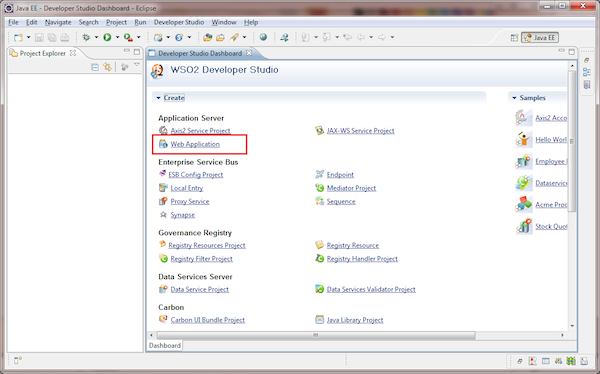