Cloud9 IDE has announced a new suite of application development features designed to allow professional developers to fully take advantage of cloud technology as the basic fabric of their workflow.

As a specialist in cloud-based Integrated Development Environments (IDEs), Cloud9 IDE has openly declared that its new product will change developers' options by improving real-time editing, debugging, and chat functionality for distributed teams.

NOTE: This enables those teams to peer review, pair-program, or just support each other while building their applications.

Al Hilwa, program director for IDC's Application Development Software research division, says that this is the kind of technology that could help programmers start to deliver on the inherent value-proposition of development in the cloud. "There are certainly many compelling reasons for moving development to a web-only environment, but there have been some real roadblocks up until now," he said.

Included in this product release is offline support to access and edit local files for streamlined online/offline synchronization to the cloud. A customizable user interface option has (as expected) also been included as a central feature to allow developers more space to work as it sits alongside a search tool and a "go-to" file widget. 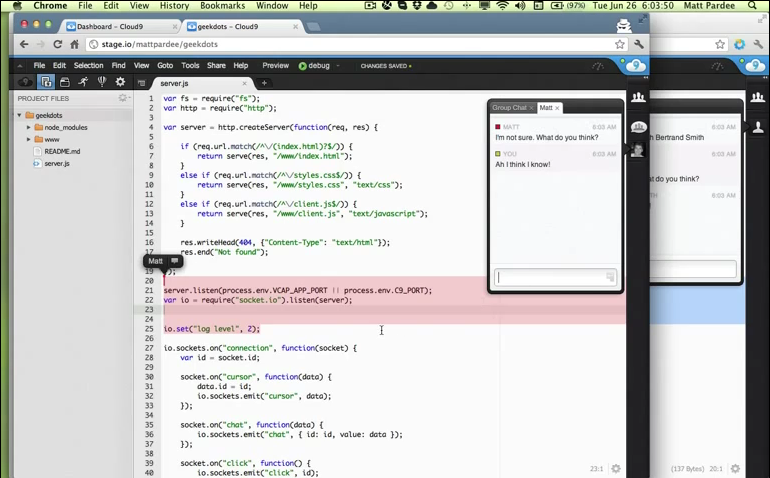 "Now, web and mobile app development can fully be taken online for a truly untethered approach to build, test, debug, and deploy code. These solutions will really empower development teams, and we look forward to seeing the innovative products that will emerge as a direct result," said Ruben Daniels, CEO and cofounder of Cloud9 IDE.

Other functions include "Your Workspace in the Cloud" — a code edit and run function that supports full shell access and the ability to run languages such as PHP, Python, Ruby, and Node.js (the latter being available on the premium feature). Finally there is also intelligent auto completion to enable code suggestions with knowledge from the JavaScript language and Node.js APIs.