Java and PHP Cloud Apps With CRON Inside

The version 1.9.1 release of the Jelastic cloud application hosting platform arrives this week with its promise of "ultra-scalable" functionality and a "fundamentally new approach" to Java and PHP hosting. So are these terms showboating marketing superlatives, or is there substance within?

This new release features a CRON scheduler, the ability to schedule database backups, and the latest versions of software stacks including PostgreSQL 9.2.4 as part of the package.

NOTE: CRON (or more accurately just Cron as in "chronos" from the Greek for time) is technology that works as a time-based job scheduling function in UNIX-like operating systems. Cron exists to enable software application developers to schedule jobs (such as systems maintenance or admin), commands, or shell scripts so that they run periodically at certain specified times or dates.

Jelastic's so-called fundamentally new approach to Java and PHP hosting hinges around a promise that users will have no need to learn custom systems or recode applications in order to deploy. Its makers further claim that Jelastic is the first cloud platform that can run and scale any Java or PHP application without any code changes.

The newly launched Jelastic 1.9.1 has a number of new features and improvements: regulating the sequence of balance charging, config manager improvement, PostgreSQL 9.2.4 support, the aforementioned CRON Scheduler, the power to schedule backups for end user DBs, and aNetBeans IDE Plugin.

Users of Jelastic 1.9.1 get access for each node configuration files and can choose to configure all the servers together or just a specific one.

Dmitry Sotnikov, Jelastic COO said, "Jelastic 1.9.1 users can run programs at a specified time with a help of scheduler, which receives instructions and performs any tasks following derived scenarios. Users can also backup databases or specific tables right from the configuration files. Jelastic assures that all data is being saved periodically and can be restored or reused." 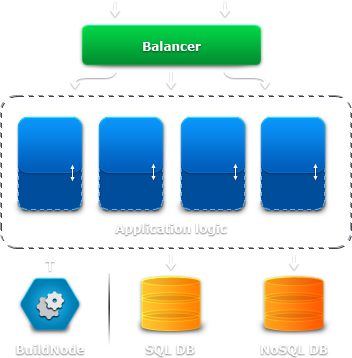