Reverb Technologies has announced its Swagger 2.0 API interface and coordinated one of the "largest ever" open standards workgroups in the API space, combining contributions from nearly 500 companies.

"Swagger effectively solves the age-old challenge of machine-to-machine communication, which has become increasingly complicated with cloud computing," claims the company.

With Swagger, developers can connect mobile devices to literally thousands of Swagger-enabled web services. The Swagger specification, first released in late 2010 by Wordnik (a property of Reverb) has been the most successful API interface effort to date.

Historically, WSDL, WADL, and WADL 2.0 aimed to perform similar tasks but (says Reverb) were "plagued with complexity" — and had limited adoption across different programming languages and frameworks.

According to the development team, by introducing a simple yet "opinionated" structure, Swagger has broken through programming language barriers to gain adoption where previous efforts fell short.

The root of Swagger is the machine-readable description format. From this interface, hundreds of projects have been developed to automatically generate documentation, developer portals, client SDKs, and even servers. With the introduction of the 2.0 specification, a standards-based and human-readable format — YAML — has been integrated to allow developers to develop Swagger-based applications in a user interface, contributed by Swagger 2.0 charter member Apigee. 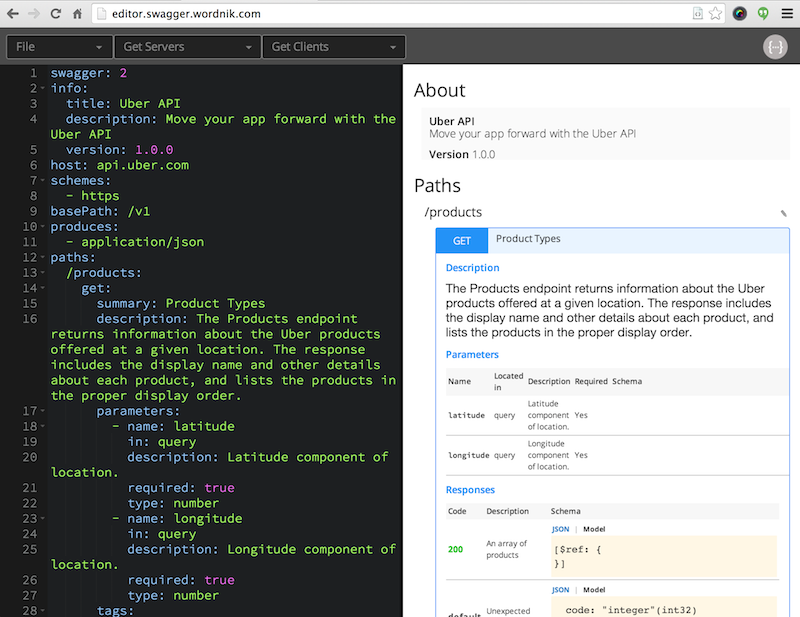