The Couchbase open source project has this week reached a new development milestone and announced the general availability of the Couchbase Server 2.0 NoSQL database product.

NOTE: Sitting outside of what are commonly agreed to be the principles of relational database management systems (RDBMS) as the dominant model for database management, NoSQL incorporates a different and wider range of technologies and architectures as it aims to address the big data performance issues for which RDBMS systems have not traditionally scaled well.

In the non-relational unstructured big data world of the virtual cloud, NoSQL is gaining mindshare.

Aiming to encroach upon Apache Cassandra as arguably the most popular NoSQL database, Couchbase Server 2.0 now boasts a "flexible document data model", which is designed to enable developers to rapidly build and modify their web and mobile applications without the constraints of relational database schemas. 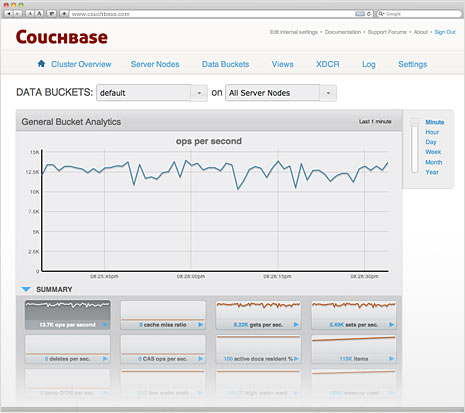 By encompassing both key-value and document database models, Couchbase Server 2.0 enables users to address a broad range of use cases with a single NoSQL database technology.

"New use cases and data requirements for high usage, massive scale-out, and flexible, rapidly changing design needs are pushing RDBMS products beyond their limits. Those products were designed for fixed schemas, where data structure varies little over time. NoSQL offerings are drawing a great deal of attention because they are designed for greater flexibility and less-fixed data definition, in line with the expectations of programmers building today's new systems," said Merv Adrian, research VP, Gartner.

Key new document-oriented features in Couchbase Server 2.0 include: a flexible data model, based on JSON, to eliminate the need to create and manage schemas. Distributed indexing and querying allows users to access stored data via queries, expanding the baseline of supported use cases, including content-oriented web applications and metadata management.

Couchbase CEO Bob Wiederhold points out that this release is marked out by its cross datacenter replication (XDCR) technology, which enables automatic replication of databases across geographically disparate data centers, ensuring data availability in the event of catastrophic infrastructure failures and improving application response time by locating data closer to the users accessing it.

"Operational enhancements, such as online data and index compaction, further enable Couchbase Server's zero-downtime application maintenance," he said. "Couchbase 2.0 is the most important release to date in the life of Couchbase NoSQL technology, and we've worked hard to make sure it provides the same easy scalability, consistently high performance, and reliability at scale."