IBM is expanding its Platform-as-a-Service investment in its own BlueMix software by adding more than 30 cloud services designed to help developers build apps in the cloud. The new services include a portfolio of DevOps, application integration, big data, and analytics-as-a-service tools.

Built on open standards and Cloud Foundry, BlueMix has added cloud integration services for secure connections between public applications and private data. IBM is using BlueMix's foundation on SoftLayer for this expansion, so this combines IBM's middleware software with third-party and open technologies to create an integrated development offering for cloud-focused programmers.

GM of IBM Cloud Platform Services Steve Robinson says that using an open cloud environment, BlueMix helps both what he calls "born-on-the-web" as well as "enterprise developers" build applications with their choice of tools.

"With the ability to easily combine a variety of services and APIs from across the industry to compose, test, and scale custom applications, developers will be able to cut deployment time from months to minutes. Rapidly growing numbers of beta participants are embracing our model of extending their existing assets and services into a cloud-based, open-source development platform, allowing our clients to bridge between the tools they are planning for the future and the workloads and services they use today to get them to market faster."

Internet of Things services here are hoped to allow developers to register and connect networked devices such as microprocessors and embedded machine-to-machine sensors to the cloud, aggregating and reacting to data and events in real time. Programmers can build applications that manage, analyze, visualize, and interact with the massive quantities of "temporal and spatial" data generated by vehicles, wearables, mobile phones, cameras, computers, sensors, and other intelligent devices. 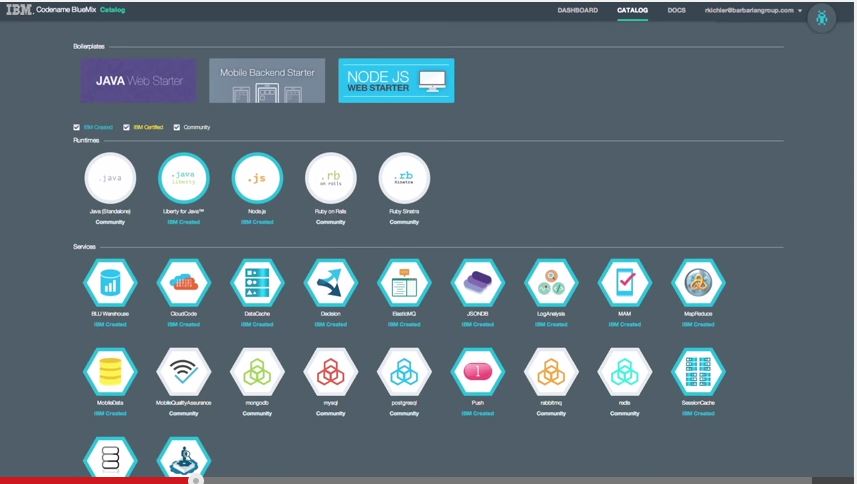