On Wednesday night, P.J. Plauger became the latest recipient of the Dr. Dobb’s Journal Excellence in Programming Award, bestowed annually on individuals who have made significant contributions to the advancement of software development. Joining past honorees such as Larry Wall, Linus Torvalds and James Gosling, Plauger was recognized for the innovative and lasting benefits his work has brought to programmers worldwide. “Dr. Plauger has rightly been described as ‘a clear and stirring writer and a programmer’s programmer,’” said Jonathan Erickson, editor in chief of Dr. Dobb’s Journal. “There’s no greater acknowledgment than that of one’s peers.” 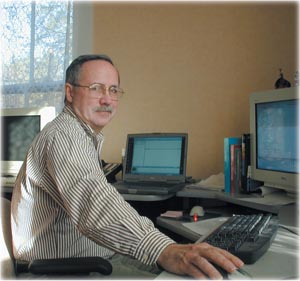 For more than 20 years, Plauger has helped to shape the evolution of the C and C++ programming languages. After graduating with a Bachelor’s degree in physics from Princeton University and a Ph.D. in nuclear physics from Michigan State University, he served as Secretary of X3J11, the ANSI-authorized committee responsible for the development of the original ANSI C Standard. He went on to develop and maintain the ISO C Standard as Convener of the ISO JTC1/SC22/WG14 committee. He has remained an active participant in the development of the C++ Standard; in fact, Plauger was unable to accept his award in person because he was attending a C/C++ Standards meeting in Australia.

Plauger has published hundreds of articles and more than a dozen books, including The Standard C Library, Programming on Purpose and The Draft Standard C++ Library. He wrote Elements of Programming Style and Software Tools in Pascal with coauthor Brian W. Kernighan, and Standard C: A Reference with Jim Brodie, and was one of several authors tapped to write the Standard Template Library. Moreover, Plauger served for more than 10 years as senior editor of The C/C++ Users Journal and contributing editor to Embedded Systems Programming, both published by CMP Media LLC, and is currently the C/C++ Users Journal’s senior contributing editor.

“My definition of an expert in any field is a person who knows enough about what’s really going on to be scared,” Plauger once remarked. By those standards, Plauger is a brave man—in several fields. In addition to his contributions to the C and C++ languages, he was an active participant in the development of the POSIX standard, and is also an award-winning science-fiction author. His short stories have appeared in publications ranging from Analog and Galaxy to anthologies such as Analog Annual (edited by Ben Bova). His 1975 short story, “Child of All Ages,” was nominated for a Hugo Award, and he received the John W. Campbell Award that year.

Plauger has also served as a member of technical staff at Bell Labs, a vice president for Yourdon Inc., president of Whitesmiths Ltd., a vendor of an early commercial C compiler, and chief engineer at Intermetrics. Currently, Plauger is president of Dinkumware Ltd., a company he launched to license standard-conforming C and C++ libraries and online documentation.

The Dr. Dobb’s Excellence in Programming Award carries a $1,000.00 prize. At Dr. Plauger’s request and in his name, the prize money will be donated to the Concord-Carlisle Regional School Committee in Plauger’s hometown of Concord, Massachusetts.