Automated code review tool Codacy has announced a "freemium" model alongside an upgrade that introduces extensive code monitoring, quality insights, and a number of customizable features.

The new version has been likened to wearable life-tracking tools like FitBit. It has a new dashboard, showing the quality of code as percentage-based goals across 10 new development categories, including errors, performance, security and compatibility.

"Improve Now" actions help developers quantify the progress that can be made by recommended tweaks across all categories. User-defined code patterns allow developers to create their own programming rules against which to benchmark their code.

"All developers are wracked by 'technical debt' — the knowledge that code is often imperfect, and the sad reality is that new priorities often make 'paying' that technical debt back really hard," Codacy cofounder and CEO Jaime Jorge said. "In an analysis of 4.5 billion lines of code, we detected close to 500 million issues, so this is by no means a small problem. Codacy's new goal-tracking metrics, presented on our new, visual dashboard, make it easy for developers and managers alike to see where improvements can be made, and the overall impact of individual changes."

The new version of Codacy also allows developers and their teams to write their own code-checking patterns in JavaScript, and can monitor code against personalized key performance indicators. These might include line length limits, library reuse, or instances of the "Hello World!" program, a basic command that is often used to verify that a language or system is operating correctly. 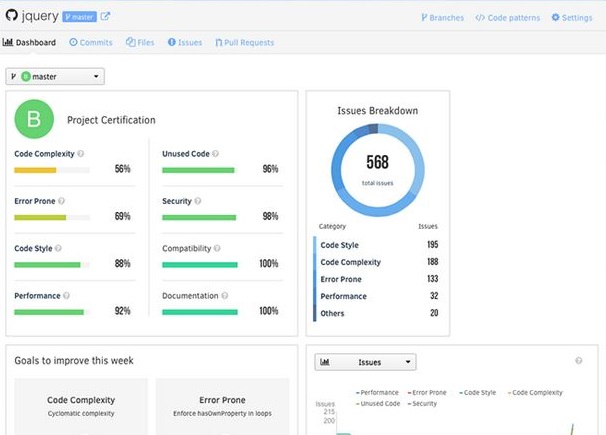