The Embedded Microprocessor Benchmark Consortium (EEMBC) has standardized its method of evaluating Android-enabled devices with a new benchmark, named AndEBench.

AndEBench gives users an opportunity to validate and compare operations on their phones or tablets, many of which vary considerably in performance. If the standard enjoys widespread acceptance, developers may ultimately aspire to improve their AndEBench rating as a means of providing independent ratification and a qualitative measure for their work.

This "industry-approved" standard is available on Google Play (the newly rebranded name for the Android Market) and soon at the Amazon Appstore for Android. In practice AndEBench will comprise a battery of performance tests for mobile devices. But its initial focus is on the CPU and Dalvik interpreter performance.

NOTE: Originally authored by Dan Bornstein, Dalvik is the process virtual machine inside the core of the Android operating system. 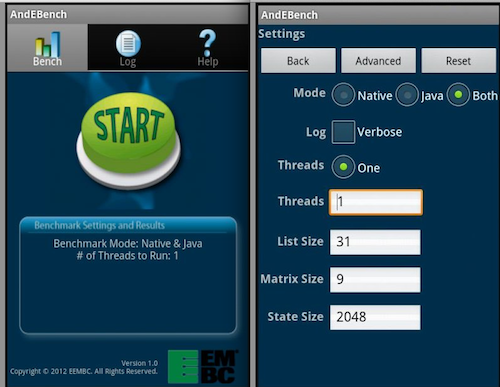 In addition to testing a device's multicore and/or multithreading capabilities, the 1.0 iteration of this yardstick compares the Android platform's native and Java performance — the objective being to provide a quantified measure of the Java interpreters' efficiency on a given platform and help users and developers understand what performance gains are feasible.

Shay Gal-On, EEMBC's director of technology, coordinated the working group that produced the AndEBench benchmark. "We developed AndEBench with a strong focus on showcasing the under-the-hood device behavior — and although AndEBench is not a fancy benchmark, it analyzes the processor's capability as well as that of the Dalvik interpreter's efficiency," said Gal-On.

"Furthermore, the collaborative effort of our working group members has ensured that AndEBench provides an equitable, unbiased, and repeatable test for mobile devices — critical to deliver data that can be used by technology providers and customers to fairly assess device performance."

"Other Android benchmarks available on the market are 'mom-and-pop' benchmarks in which the motivation of the benchmark developer is unknown and results can vary significantly. Furthermore, since source code is typically unavailable, it is nearly impossible to verify the functionality or true usefulness of these benchmarks," said Markus Levy, EEMBC's president.

"EEMBC provides an industry-approved benchmark where the source code is available to members and licensees, providing a full understanding of the code internals, to encourage hardware and software developers to use the results to drive product improvements that matter to end-users."

EEMBC encourages all vendors and manufacturers to join the consortium's working group to contribute to future AndEBench versions. These versions could include stress testing for features and functions such as OS layer calls, graphics, audio, networking, floating point, and SIMD functions.