McObject has released its eXtremeDB 5.0 embedded database system with new features aimed at faster clustering and application development such as the Message Passing Interface (MPI) standard, which increases messaging efficiency for parallel processing on distributed-memory systems.

Graves also points to a local tables option that exempts specified eXtremeDB Cluster tables from cluster-wide replication, to accelerate processing at the local node. Local tables are shareable, when desired, through a scatter/gather mechanism.

In McObject's tests, eXtremeDB Cluster using Infiniband and MPI performed more than 7.5x faster than the same system implemented with "plain vanilla" gigabit networking (TCP/IP and Ethernet). MPI can also be used over Ethernet-TCP, and in McObject’s tests this combination performed almost 1.5x faster than using TCP/IP over Ethernet. eXtremeDB Cluster's Infiniband and MPI support is provided on Linux in the current release.

For the community of developers using eXtremeDB with the Java and .NET languages, version 5.0 adds features including .NET and Java class generators. eXtremeDB's database schema compiler, mcocomp, can now process database definition language (DDL) files (database schemas) written in the DBMS's native language, and output code defining the equivalent .java and .cs classes. This is described as "a boon" when adding Java or .NET front-ends to existing eXtremeDB databases that are defined in the native DDL. 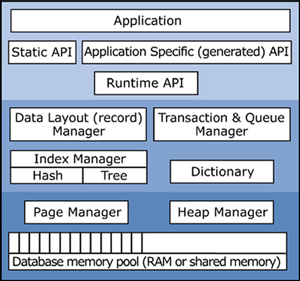