Last time, I talked about my inconvenient logic analyzers; this time, I'll tell you more about my quest for convenience.

A coworker asked me about buying a telescope the other day. I gave him advice I'd received earlier: The best telescope is one that you will use. If you have a $100 telescope that takes 5 minutes to set up, you might use it more than an $800 telescope that takes two people an hour to set up. So even though the $100 telescope isn't really all that great, it is a better value because you will use it more. Last time, I was talking about my inconvenient logic analyzers; this time, I'll tell you more about my quest for convenience.

A little eBay shopping let me pick up an "ArmFly" logic analyzer for about 10 bucks. No kidding. It is a Cypress CPU that receives a firmware load from the host computer. In reality, it is a clone of the USBee hardware, although as far as I can tell they all originate from a Cypress reference design. From what I have read online, there is a constant battle to keep the USBee software from running on these clones, but since I wanted Linux software anyway, that didn't concern me (there is no USBee software for Linux).

The open source software sigrok supports the ArmFly (and the USBee, and a host of other logic analyzers and similar instruments) and my plan was to use that. In the end, I did wind up using it, but not in the way I expected.

There are a few things that sigrok suffers from and the main one is out of date or lack of documentation. Another item is that some of the ancillary pieces are not quite ready for prime time. For example, the serial UART decoder has a comment in the code that there needs to be a way to invert the incoming signal, but it fails to provide a way to do that (short of writing your own code, of course). The GUI front ends are not really polished nor do they offer all available features.

None of these problems are insurmountable, but they do detract from the overall package. Of course, the strong parts of sigrok are its wide array of input and output options. Last time I showed you the LogicSniffer software and — not surprisingly — the sigrok tool can output in that file format.

Once again, I hooked up an Arduino with a simple SoftwareSerial test program:

With a probe on pin 11, sigrok can dump a "graphic" right to the terminal: 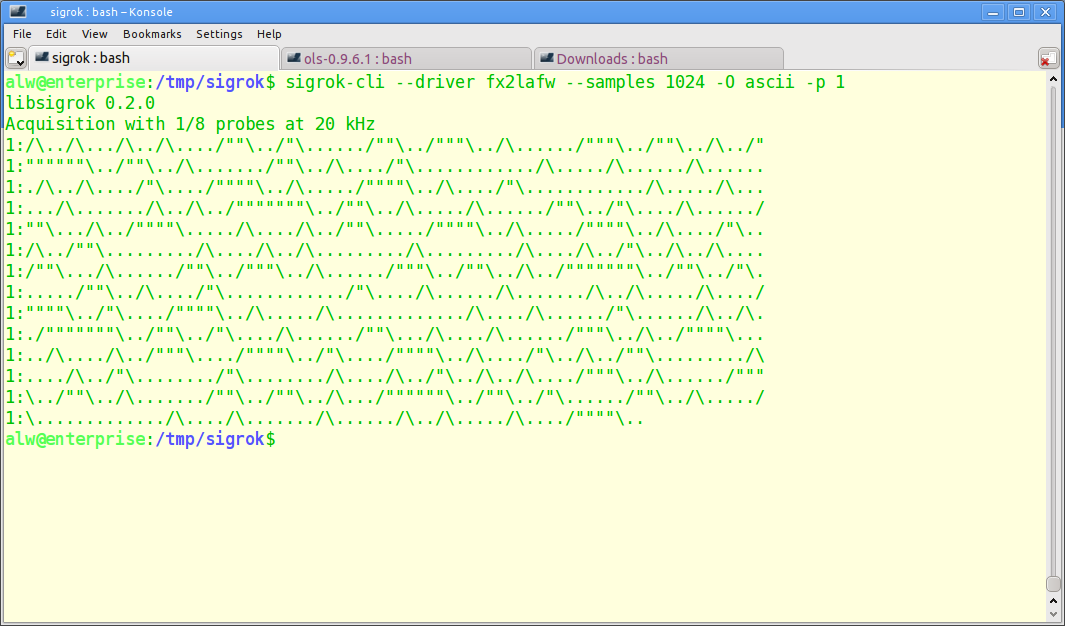 Cute, but hard to read. Note the command line:

Despite the current documentation, this is the correct way to use the tool. The --driver options tells the software what device to look for. In my case, all of the Cypress-based cheap analyzers use the same driver, fx2lafw. The rest of the options are self-explanatory. Collect 1024 samples from probe 1 and emit them as ASCII. You can read up to 8 channels at once with this hardware.

It takes some detective work to figure things out. If you use the --show option you can learn more about the driver's support for your hardware:

That tells us that there's an option for the driver called samplerate. The values are fairly tolerant. For example, 25 kHz can appear as '25 kHz', 25khz, or even 25000. Let's go to 100kHz sampling:

The same trick works for learning about protocol decoders:

The output goes on, including wording about inverting data. However, in the actual code there is simply a comment that inverted input is "to do."

I can change the -O ascii option to -O vcd and get a dump that is just what I would get from a typical Verilog simulator. A tool like gtkWave can easily read that: 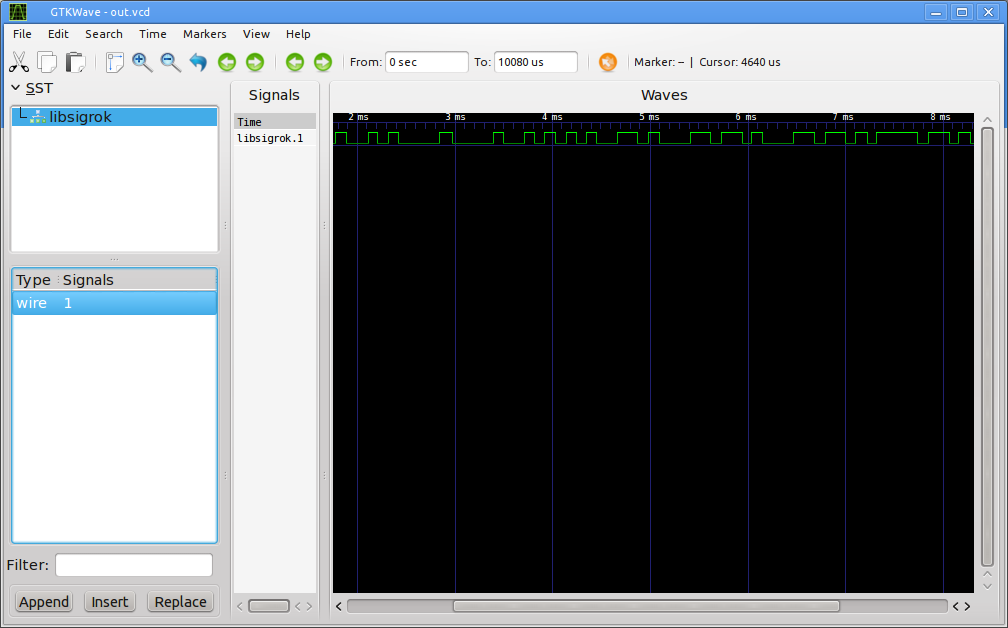 Note that I'm only looking at one signal by choice. You could easily add any or all of the 8 signals into any of these displays.

Of course, gtkWave doesn't do sophisticated signal decoding (that I know of, at least). But with the OLS format (-O ols) it is possible to read the data into LogicSniffer and use the UART analyzer tool just like I did last time. 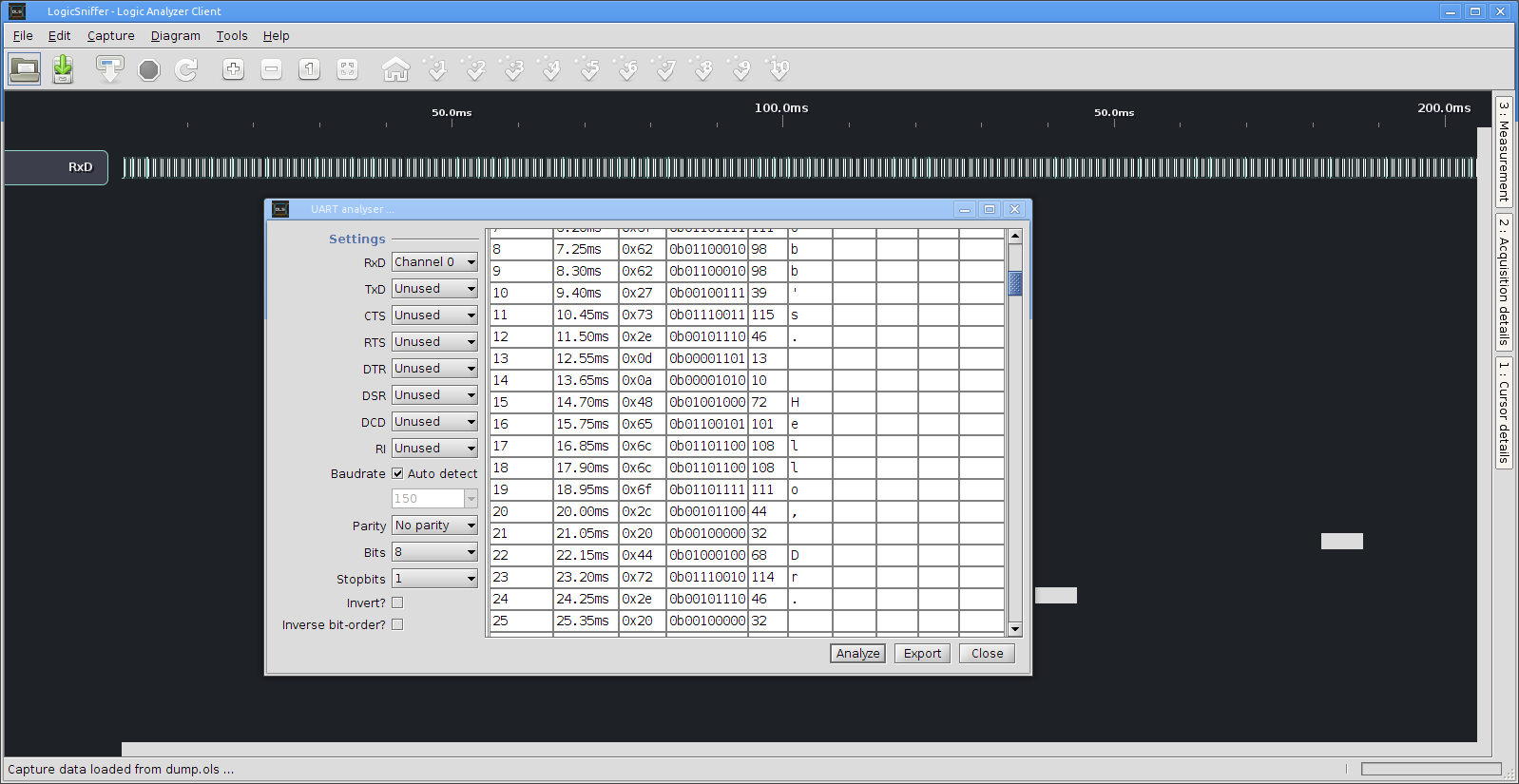 You can combine the sigrok software with the idea of using named pipes I talked about last time:

Now you can ask LogicSniffer to do a "generic" acquire on /tmp/sigrok.pipe and you can capture the data directly into the tool without an intermediate file.

You can trigger in a very limited way, and perhaps I'll talk about that next time. However, if you expect this little box — about the size of a small box of mints and about the price of a hamburger — to match an expensive professional instrument, you'll be disappointed. However, its cost/benefit ratio is very good. It is also handy, like a small cheap telescope. It might not give the best views, but you are more likely to look.