Web-based coding IDE Codio has launched with an offer that allows software application developers to write and execute code for free using a browser. Now out of Beta, over 40,000 developers are currently using Codio for HTML5, CSS, and JavaScript development at the front end.

At the back end there is usage in NodeJS, Ruby, PHP, as well as other languages including Go, Haskell, and Ocaml. Codio comes with some common languages and developer tools preinstalled and allows additional components and stacks to be installed with single commands. Each Codio project is preinstalled with NodeJS, Ruby, Python, Java, and C compilers as well as Git and Mercurial.

The software itself comes from Application Craft UK. The firm says that unlike web-based code editors, Codio automatically creates a dedicated virtual server for each individual coding project.

A project (and its development stack) are clonable, so each stack, once installed and configured, can be shared with other people, reducing setup time each time other developers want to create the same stack.

Codio's "Box Parts" allow stacks to be installed with a single command. For example, 'parts install php5 mysql apache2' is all that is needed to install a complete LAMP stack in about 20 seconds. Codio's collaboration features allow a project owner to grant access to others, who can then instantly access, edit, and execute that user's project without any local stack setup.

Codio is free to users who are happy to share their content publicly and comes with an $8 per month subscription fee for those who wish to keep their work private. 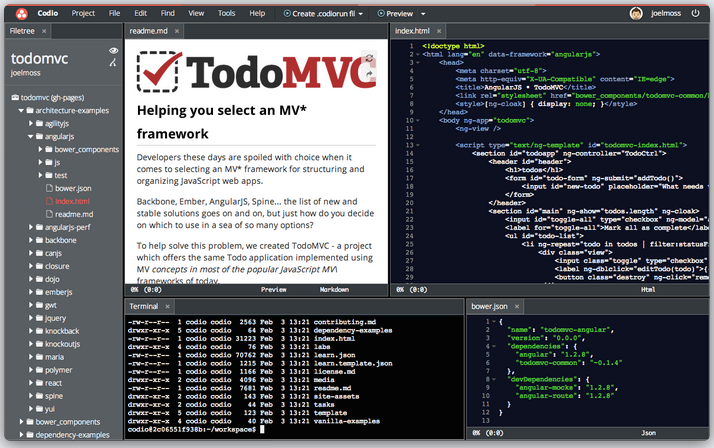