Load Impact has unveiled a plug-in for TeamCity by JetBrains that allows developers to run performance tests. TeamCity is a Java-based build management and continuous integration server designed to run automated tests.

According to JetBrains, TeamCity is an all-in-one, preintegrated, multi-source, load-testing solution whether you develop in Java, .NET, or for mobile platforms.

So all together, this offering represents advanced scripting and a GUI-based session recorder (to create tests simulating multiple typical users) and, also here, we see Load Impact's Server Metrics Agent (SMA) for correlating the server side impact of testing with CPU, memory, disk space, and network usage.

According to Load Impact founder Ragnar Lönn, "Using our plug-in for TeamCity makes it easy to add regular, automated load tests to their nightly test suites, and as a result, get continuous feedback on how their evolving code base is performing."

Lönn also says that any performance degradation, or improvement, is detected immediately when the code that causes it is checked in, which means developers always know if their recent changes were good or bad for performance.

The release of this plug-in comes at the same time as news of Load Impact's cloud-based service hitting over a million global developer performance tests by website, app, and API-focused programmers. 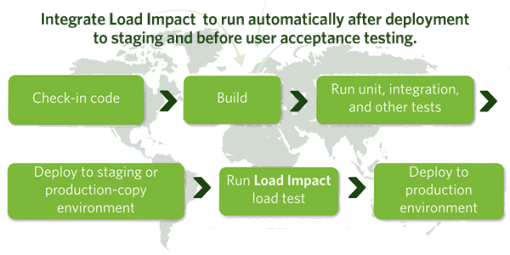