MS Windows 8.1 RTM and VS 2013 RC Available to Developers

Microsoft's call to build and test your apps for Windows 8.1 now

Microsoft this week informs developers that access is open to the Release Candidate (RC) for Visual Studio 2013. The company also announced that Windows 8.1 RTM (release to manufacturing) and Windows Server 2012 R2 RTM are now available to the developer community via MSDN and TechNet.

The invitation here from Redmond is, build and test your apps for Windows 8.1 now in advance of Windows 8.1 general availability in October. However, given the subtle differences between Windows 8.0 and Windows 8.1 with its pseudo-START button (that isn’t really a start button), one has to question whether developers will radically reshape any plans already in motion at this stage, however positive the overall release of 8.1 may be.

Microsoft unsurprisingly turns on the "touchy-feely" spin here and says that it is confident these pre-release versions will enable developers to prepare and test their applications and infrastructure for the next release of Windows and Windows Server.

NOTE: Although developers now have all the tools they need to build and test their Windows 8.1 apps, they will need the final versions of Windows 8.1, Windows Server 2012 R2, and Visual Studio 2013 to onboard their apps to the Windows Store, starting October 18 2013.

New features in Visual Studio 2013 RC include Office 365 Cloud Business app development so that programmers can create business applications that extend Office 365 to help users interact with business processes, artifacts, and other systems. Office 365 Cloud Business Apps run in the cloud and are available to run on a "myriad of devices" (says Microsoft) to aggregate data and services from in and out of an enterprise, plus help integrate user identities and social graphs.

NOTE: These applications integrate with the application lifecycle management capabilities of Visual Studio — and this is, in effect, a play from Microsoft to bridge the worlds of the business application developer with IT operations.

Also featured here we find the TypeScript language for application-scale JavaScript development after Microsoft released its first public preview less than a year ago now.

According to Microsoft, "With Visual Studio 2013 RC, we are including the most recently released version of TypeScript tooling (v0.9.1.1) as we continue to seek community feedback from our early adopters. TypeScript brings classes, modules, and optional static types to JavaScript development. In Visual Studio, this enables rich tools like live error reporting as you type, IntelliSense, and Rename refactoring."

Work Item Charting has also been included to help programmers create a variety of charts to visualize data based from work item queries, such as bugs, user stories, and tasks. As a work item data changes, simply refresh your charts to reflect the latest information says Microsoft.

In separate blog posts from executives S. Somasegar and Steve Guggenheimer, Microsoft invited developers to download and try the many new features in Visual Studio 2013 RC — the latest version of Microsoft's developer tools — in order to provide feedback for the final release. 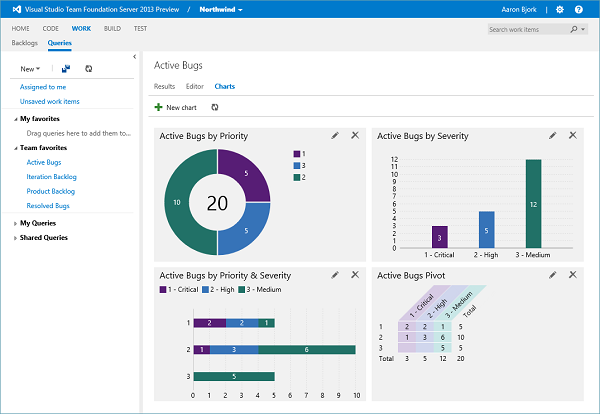