This product is aimed at developers and programmers (whichever term you prefer), but also designers and business users. Users can build functional animated UI prototypes without requiring a single line of code.

Mobile gets more attention in this latest release as users get a platform selector, new touch gestures, built-in screen-to-screen transitions and, perhaps most crucially of all, the ability to run prototypes on any device that supports HTML5 including iOS, Android, and Windows devices.

"Creating an unforgettable user experience is a reflection of who we are as a company, and with Indigo Studio, we are giving app creators the chance to bring their ideas to life, whether they are seasoned coders and designers, or novice project managers," said Dean Guida, CEO of Infragistics.

"Indigo Studio V2 makes the process of creating a UI faster and easier, giving the designer or developer an opportunity to present their concepts for early stakeholder and user-feedback, facilitating a lean UX process and reducing the risk of rework once the app is in development. No matter what platform they're creating for, we want our users to have all the tools needed to design rich and interactive UIs they know will work and, in turn, deliver exceptional user experiences."

In addition to the new features, Indigo Studio allows users to design storyboards with real-world usage context, integrate their prototypes within their storyboards, and annotate, share, and document their designs. 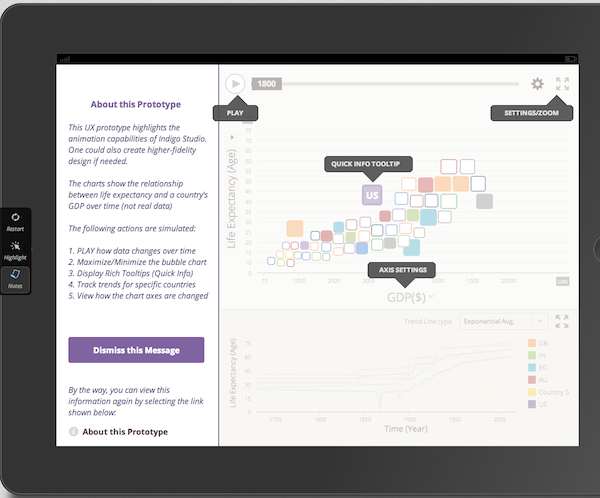