The firm says that RAD Studio XE5 is the only solution on the market that provides true native, CPU executable code on all four leading computing platforms (Android, iOS, Windows, and OS X) while managing one codebase.

Obviously developers will be attracted to the opportunity offered by true native apps that run directly on the device hardware with no scripting or interpretive layers — so a new survey by Dimensional Research suggest that while 85% of Windows developers are tasked with developing mobile apps and 85% prefer native apps, only 17% believe they can reasonably deliver native mobile apps for two or more platforms.

Embarcadero senior vice president of products Michael Swindell explains that development teams can both prototype and develop native apps in standard C++ or Delphi programming languages for multiple devices simultaneously, meaning that there is no need for multiple projects, schedules, and budgets with separate development teams, tools, languages, and libraries to target each device platform.

"The biggest challenge facing software development organizations today is how to best deliver their business across an ever-expanding list of devices. With RAD Studio XE5, developers can now deliver native apps for Android, iOS, Windows, and OS X devices in a fraction of the time and cost of any other solution," said Swindell.

The RAD Studio development team says that XE5 has all the ingredients for a Multi-Device Application Platform (MDAP). New REST client support is supposed to make it easier to connect to any REST-based service including social networks, MBaaS, payment services, storage, etc.

According to Embarcadero, developers can now tackle enterprise BYOD challenges and ensure their apps not only run on multiple devices, but also support multiple backend services, both inside the corporate firewall and in the cloud. 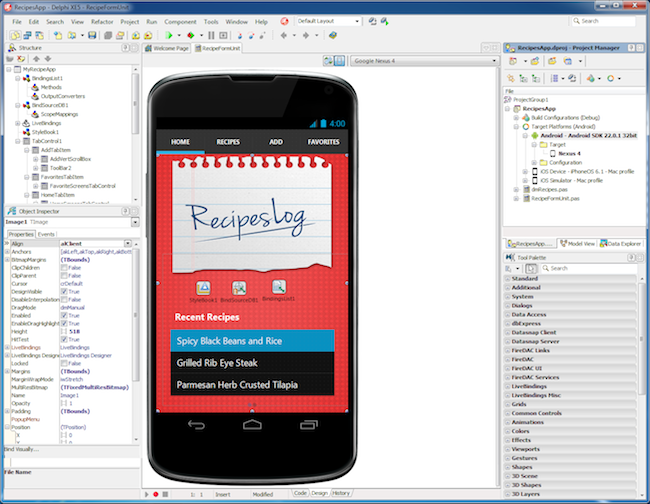