Earlier this month, Google released its Patchfield audio library. This can now be used by Android developers to help construct specialized audio applications capable of being connected to other audio apps inside Android environments.

Peter Brinkmann of the Android speech infrastructure team describes Patchfield as a means of creating "highly focused audio apps" (such as synthesizers and effects), which can combine their capabilities by connecting them to one another in a virtual patch bay.

Google explains that Patchfield is inspired by JACK, the JACK Audio Connection Kit, to provide a simple, callback-driven API for implementing audio modules, a flexible API for managing the signal processing graph, and support for inter-app audio routing.

NOTE: JACK is a system for handling real-time, low-latency audio (and MIDI). It runs on GNU/Linux, Solaris, FreeBSD, OS X, and Windows (and can be ported to other POSIX-conformant platforms). It can connect a number of different applications to an audio device, allowing them to share audio between themselves.

"Running as a remote service, Patchfield allows audio developers to create interoperable apps that focus on a single task each, such as synthesis or effects or recording. The output of one app can be connected to the input of another, for a combinatorial explosion of possibilities. Running locally within a single app, Patchfield provides a powerful way of organizing the audio components of an app. The implementation resides entirely in user space and works on many stock consumer devices, such as Nexus 7 and 10," writes Brinkmann.

Developers can get access to Patchfield at GitHub under the Apache 2.0 License. 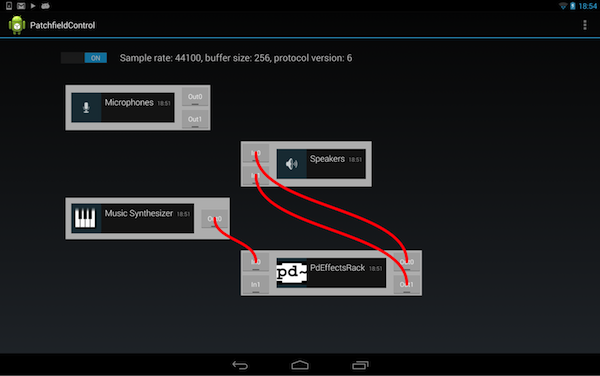