Agile software company ThoughtWorks publishes a technology trends "radar report" resulting from debate analysis emanating from the firm's own Technology Advisory Board. The October 2012 has thrown up some pointers, which may signal the increasing use of certain techniques, tools, languages, and platforms.

For each item on the radar, ThoughtWorks provides a recommendation about the use of that item by placing it into one of four classes: Adopt, Trial, Assess, and Hold. The report is divided into four quadrants that cover Techniques, Platforms, Tools, and Languages & Frameworks.

According to ThoughtWorks, in Languages & Frameworks the industry is undergoing a "seismic shift in programming languages" with functional hybrids, including Clojure and Scala, identified in the Adopt circle for the first time. Reaching maturity are also a number of JavaScript frameworks, including Require.js, Angular JS, Knockout, and Twitter Bootstrap.

In the Techniques bracket ThoughtWorks suggests that "significant shifts" are taking place within mobile. As mobile increasingly becomes the primary way of accessing the Internet, this needs to be factored in to new enterprise application and product strategies, through to implementation — from "mobile first" design all the way through to a new breed of testing tools.

In Tools, simple architectures continues to gain traction, including both techniques for building and composing applications, as well as infrastructure-based techniques to enable simple deployment, failover, and recovery. 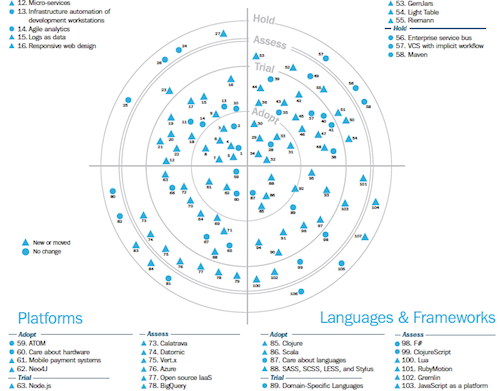 Reproducible environments (and the tools to support them) feature prominently in this analysis as they have (reportedly) established themselves as a viable alternative in development, test, and production environments.

Tools supporting the standardization, set-up automation, and coordinated management of development, test, and production environments for both internally hosted and public cloud environments feature prominently on this edition of the radar.

In Platforms, with the growing acceptance of "NoSQL" databases, the concept of Polyglot Persistence (an alternative way to store information using multiple data stores) has emerged as a viable enterprise option. Its growing acceptance is illustrated by the Neo4J platform being identified in the Adopt circle and Riak, MongoDB, and Couchbase placed in the Trial circle.

"There are a lot of industry buzzwords out there, and it can be hard to keep up with the latest trends and innovations in software development," said Neal Ford, director and software architect at ThoughtWorks.

"To help our customers and the industry keep apace, our Technology Advisory Board meets twice a year to debate the latest trends and share their thoughts on a host of technologies. Their conclusions and recommendations are reflected in the latest Technology Radar," added Ford.