Dryad trees are truly 3-D; they can be spun around or viewed from any angle.

When Vladlen Koltun decided to build a better virtual world, he began with 3-D trees -- millions of them. Now he wants to give them away.

Trees, like almost all objects in virtual worlds, whether in video games or Internet social communities like World of Warcraft or Second Life, are enormously difficult and expensive to build.

"There is a very, very tiny community of people around the world who are skilled at creating three-dimensional objects," Koltun said. "And they are the ones who do it all. Which is one of the reasons why you don't see three-dimensional content on the web; because nobody can create it."

The inability of casual computer users to build 3-D objects -- you practically have to be a sculptor, Koltun says -- is an anchor holding back the promise of virtual worlds. When the day arrives that anyone can design everyday objects, the three-dimensional environment of virtual worlds will finally live up to its promise as an ideal setting for almost any human interaction: education, business, job training, phobia therapy, gaming, sharing interests with other people (or their avatars) and, of course, flirting with alien creatures.

The virtual world should serve as "a social network that allows you to share space and participate in experiences together," Koltun said. "You can form ad hoc groups that don't require any sort of registration. You can just walk up to a person, walk up to a group of people, and start a conversation."

When Koltun, an assistant professor of computer science at Stanford University, set out with his Stanford Virtual Worlds Group to prove that object construction can be sophisticated without being difficult, they began with trees. 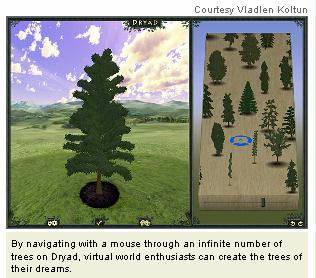 Why trees, instead of buildings, animals or humans? Because, it turns out, botanists have already cataloged and categorized the trees of the real world in great detail. Koltun's group has incorporated that data into a powerful mathematical engine that creates trees using about 100 different tree attributes, all of them almost infinitely variable. How thick is the trunk? How big the leaves? How are the limbs spaced?

The result is a new, intuitive way for individual users to create unique trees by simply using a mouse to seamlessly navigate through the entire "space of trees," changing appearances by changing direction. Koltun's freely available software, Dryad (a tree nymph in Greek mythology,) lets users move through the 100-attribute tree space in a fashion similar to navigating city streets on Google Maps.

"With Dryad, you navigate the space of all trees and simply choose the one you want," Koltun said.

An important feature of Dryad is an information-sharing technique that improves the software every time someone picks a tree.

As in real life, not all trees are equally desirable. Since no single user is capable of mapping out the best parts of the enormous tree space, this mapping of desirability is done collaboratively, leading to continuous refinement of the software. Dryad's mathematical model nudges users toward trees that have some resemblance to trees that have proven popular with other users. Otherwise, Koltun said, with an infinite number of trees, some of the outliers are bound to look more like Jackson Pollock paintings than neighborhood trees.

Dryad trees are truly 3-D; they can be spun around or viewed from any angle. They also can be downloaded in the OBJ format and loaded into any major modeling program.

[Editor's Note: Coincidentally, researchers at Microsoft have also implemented a development environment called Dryad. However, there is no relationship between the two.]