PHP company Zend has announced the Apigility open-source project. This "opinionated" API builder champions API-centric and API-based architectures for Agile and mobile delivery; i.e., in scenarios where the application's data and services are coming from multiple back-end systems and are consumed from multiple different front-end devices and form factors.

Zend says that separating the presentation logic between the client and server provides the flexibility to support multiple form factors and integrate with third parties. The firm claims that APIs themselves have the power to future-proof an application such that capabilities can be easily reused at a later point, without having to refactor the entire system.

When compared to "simple" HTML-based apps, API-based apps are said to be relatively complex to design. They are a relatively new form of application architecture and so many best practices and standards are still emerging. Best practices for an API-centric design must address areas such as error handling and versioning, which are complicated and time consuming to do correctly.

Apigility sets out to provide a user interface for building APIs in a simple, standardized way, using industry standards and best practices.

According to Zend, "Developers can create an API and wire in any number of the nuts-and-bolts services that Apigility provides. This automates some decisions, making the coding process easier and less cumbersome. Zend has recommended best practices for API creation in terms of authentication, error handling, filtering and validation, and documentation."

Apigility's role does not end with the creation of the API — it is designed to allow developers to evolve their APIs as requirements change (add, update, or remove APIs), and has full support for versioning.

Error handling — When an error happens on the server side, Apigility reports the response involved and the nature of the problem to the API consumer. Apigility's problem report enables programmers to easily parse and understand what happened, plus tailor error reports to deliver as much or as little information as desired.

Validation — Apigility ensures that all data coming into an API is valid. If not, Apigility sends a single response, in a predictable format that returns all errors. API consumers know upfront when they did something wrong.

Content negotiation — Apigility enables developers to know when something is wrong with submitted data. It will verify whether each client is capable of viewing an application, and whether data submitted to an API is of an acceptable content type. If not, Apigility sends back a response indicating that the API can't provide a representation, or cannot understand the data.

Versioning — Apigility supports multiple versions of the same API, with added, altered, or removed services— it enables developers to easily support both old and up-to-date clients at the same time, and fully automates version negotiation. 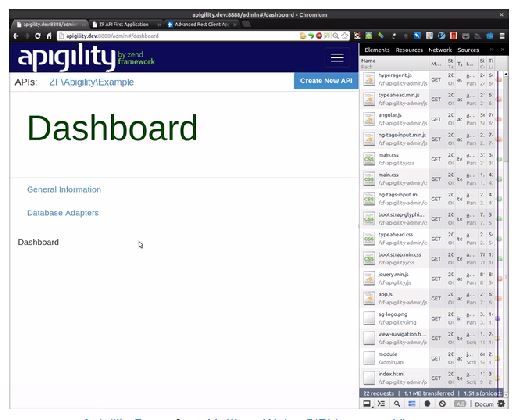