Does the future of computer games and simulation depend on interactive storytelling? Chris Crawford thinks so—and he's bet his Oregon farm on it. 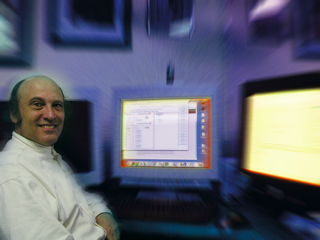 Chris Crawford wrote his first computer game in 1976 on an IBM 1120. He joined Atari in 1979, became manager of programmer training and a successful game designer: His Eastern Front was a best seller. He is a true legend in game design. His book The Art of Computer Game Design is considered a classic. His Balance of Power game sold an unheard-of 250,000 copies in 1984. In 1987 he founded the Game Developers Conference and chaired it for seven years.

In the late '80s Chris began writing increasingly creative and imaginative games, pushing the art, moving it toward something like a true art form. This pushed him rapidly away from commercial viability, and he left the game industry. Today he dismisses current video game work as derivative and redundant, and says that games won't appeal to a broader audience unless they get more creative.

It all started coming together a couple of years ago, and Chris now has a company (Storytron), a business model and a business plan, a creative team, and three key pieces of software in varying stages of development. There is also, of course, a web site (www.storytron.com) where anyone interested in interactive storytelling can join the forum, read the tutorials, and download the current version of the Storyworld Authoring Tool.