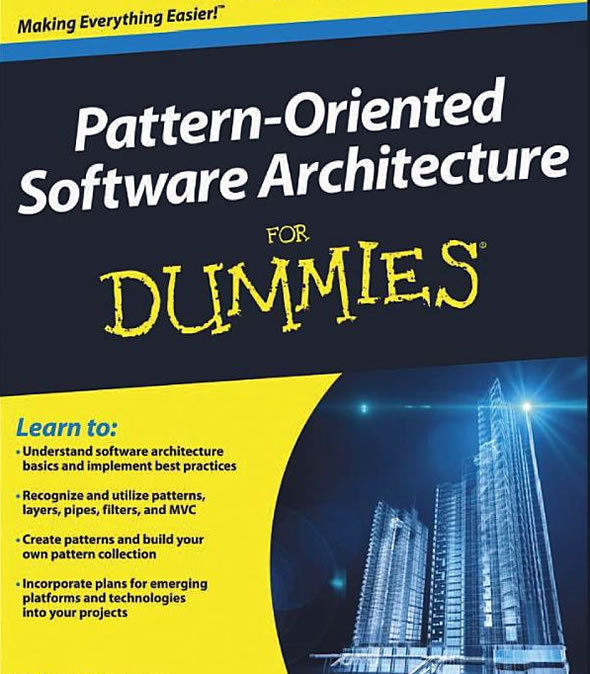 When a classic text such as Buschman's multi-volume Pattern-Oriented Software Architecture is reissued by the publisher in a more accessible version, such as the "For Dummies" series, it's worth seeing how the new presentation works.

The author, who has spent much of his career working with and teaching patterns, is well qualified for the task. The result, however, is mixed. The book does a good job of presenting the concept of a pattern and explaining its benefits. However, the choices of patterns he lists are questionable. He uses the same pipes and filters, master-slave, forwarder-receiver, and MVC found in the original work. But when it comes time to adding the Gang of Four (GoF) patterns, the author is MIA. He frequently refers to the book as a seminal influence, but useful patterns such as command, decorator, and visitor are not explained (the last two don't even appear in the index). Many of the remaining GoF entries get short shrift (bridge, façade,and prototype get one passing mention each.) I believe that readers who have some knowledge of GoF will expect to see more coverage in this volume — and be disappointed.

Likely because this book is in the "For Dummies" series, it does not include implementation code. The closest it comes is UML diagrams and, surprisingly, some CRC cards. I expected that the lack of code would prove to be a more serious limitation than it was. The author's ability to stay at a conceptual level but anchor it in specific examples is workable. This book will be useful to managers who need a greater understanding of patterns, but don't need to implement them themselves.