The term haptics refers to the sense of touch from the Greek ἅπτω = "I fasten onto, I touch". So when we refer to haptic technology, or haptic feedback, this is (in the broadest sense) the act of stimulating a user's sense of touch such as with a vibrating hand controller.

Immersion describes a haptic effect as one that defines the behavior of the vibration actuator over a (typically short) period of time, just like a sound clip defines the behavior of an audio speaker over time — so you may have a "crunch" sound clip that you use when some event occurs in your app; likewise, you'd use a "crunch" haptic effect when the appropriate event occurs in your app.

"Immersion's growing community of game developers has embraced haptic technology as a way to create more engaging and differentiated gaming experience," explains Suzanne Nguyen, Director of Developer Marketing at Immersion. "Our library of gaming effects includes predesigned haptics for a broad range of use cases, from action effects, like explosions and collisions to UI effects, such as select confirmation or textures. We make the design and integration of haptics as easy as possible, and now we are empowering developers to access our haptic effect library directly from their favorite development environment."

Immersion haptic technology works on all Android devices, and will be automatically turned off when ported to games for other OS types. aThe company offers a number of resources for Android game developers, including the Haptic SDK for native application development, the Haptic Studio tool for custom effect design, sample code, quickstart guides, and a technology forum, via the developer website. 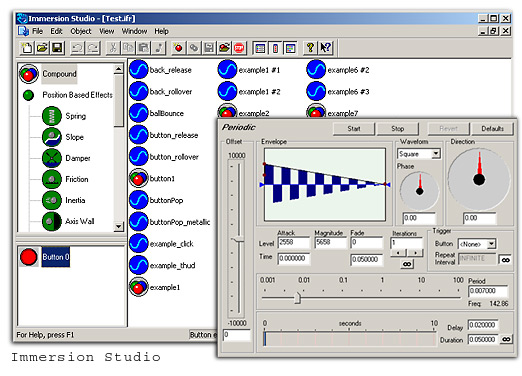