In what is seen as a major overhaul to the cross-platform application and user interface framework, Qt 5 Alpha has been released in advance of the full-blown iteration, which is expected later this year.

Under its Nokia parent, Qt appears to have transitioned to a state where it accommodates for (and promotes the adoption of) so-called "fluid touch based experiences" common to contemporary devices. Used extensively across the smartphone (and desktop) landscape, Qt also enjoys considerable deployment within embedded applications seen in areas such as medicine and healthcare.

The developmental direction of Qt 5 suggests that there has been a marked move away from a "traditional" system of widgets employing QWidget C++ classes, to now focusing on leveraging the Qt Quick declarative scripting framework. Reports suggest that the wider implications of this progression will see Qt eventually migrate further away from its roots, which are (or were) embedded in C++ from the start.

According the Qt developer blog, "Qt 5 will make it easier and faster to create smooth accelerated graphics performance with limited resources by making better use of the GPU, resulting in better performance on inexpensive hardware." Qt 5 on Raspberry Pi is a nice example of this — and we also now see advanced UIs and applications with QML and JavaScript, such as evidenced on the Qt Media Hub .

Detailing the new Alpha launch, Qt's Daniel Kihlberg writes as follows, "With Qt 5 it will continue to be easy for you to maintain code as well to jump on new market opportunities on other desktop platforms or by targeting industries like medical, oil and gas, home media, and automotive infotainment by reusing code for different targets. We believe that the amount of maintained ports will grow beyond the Windows, Mac, and Linux Wayland/X11 ports." 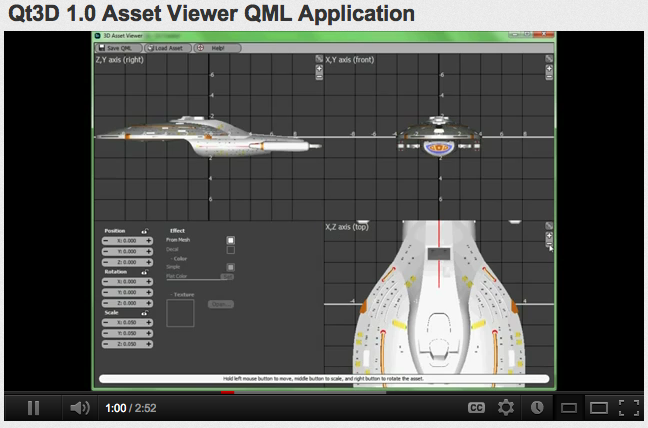 "The QNX and Android ports, created by the Qt community, give a glimpse of what is possible. Qt 5 aims to offer the best possible functionality on each platform, while still offering efficient reuse for the majority of the code across platforms — with a focus on the back-end," he added.

Developers using Qt Quick now have the opportunity to build what might be described as "distinctive" UIs employing custom-selected graphics that benefit from (once again) "fluid" animation and support for touchscreen functionality. This is an "interactivity" game play by Qt — and why not, if that is what the users want.

Cornelius Schumacher, the president of KDE e.V has, said that the alpha release of Qt 5 is a major milestone for the KDE community technically as well as from a community point of view. "The open governance model allowed KDE to contribute to Qt like never before — and Qt 5 will be the base of the next major release of the KDE framework. We are happy to see Qt prosper and being able to be part of that," he said.

Please note that the alpha release will be a source-only release without binaries to download, so you need to build the binaries yourselves: instructions on how to do this here.