Apache Cayenne v3.1 Spicier and Hotter All Round

The proposition from the Foundation is that this will free solutions from being locked into one database engine. At the same time, it improves performance through paging and caching, enforces data integrity, and makes it faster (says the Foundation) for developers to build a reliable application.

Notable new features and improvements include easier configuration and embedding in any type of application; and a highly configurable runtime, enabled by one of the smallest built-in Dependency Injection (DI) containers written specifically for Cayenne (and that co-exists with other DI/IoC, such as Apache Tapestry).

Different aspects of an application can now be modeled in separate mapping projects and combined in runtime as needed. As a result, Cayenne projects can be included in libraries that make no assumptions about the target use. Cayenne ships with a "cayenne-lifecycle" module that provides a few common examples of such workflows activated on data changes: data modifications audit, precision cache invalidation, and performance optimizations for improved overall concurrency.

"Developers who are seeking an alternate to EJB/Hibernate might find Cayenne's graphical modeler, reverse database engineering, easy-to-use query API, and flexible context model a joy to work with," said Aristedes Maniatis, member of the Apache Cayenne Project Management Committee and CEO of ish.

In addition, Apache Cayenne's HTML documentation and tutorials have been completely revised and available in PDF for the first time. 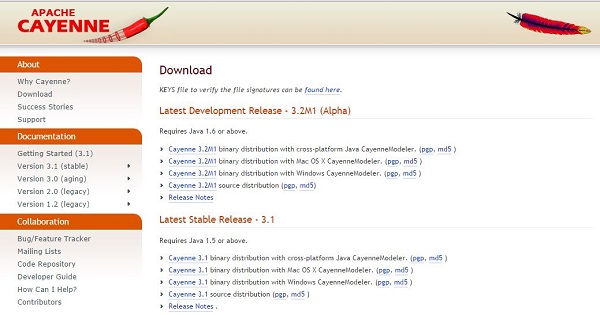