A new upgrade for the BlackBerry 10 Theme

BlackBerry and Sencha have collaborated to produce a new upgrade for the BlackBerry 10 Theme, which will be available in the upcoming Sencha Touch 2.3 version.

Developers will be able to create HTML 5 apps that are "nearly indistinguishable" from native Cascades apps, say the firms. Sencha itself used its SenchaCon developer event this month to host a number of sessions, one entitled "Porting Sencha Apps for an Astonishing BlackBerry Experience."

If we look more closely at what BlackBerry is saying about its version 10 browser, the firm explains that it was created using building blocks based upon HTML5 and CSS3. The firm now insists that web technologies are not in and of themselves limiting, as it now works on optimizing performance.

The BlackBerry developer blog quite charitably says that Sencha "has a knack" for showing that HTML5 is ready for modern mobile application development.

Meanwhile, Blackberry also recently announced the availability of a new security solution that separates work and personal apps and data on iOS and Android devices.

Secure Work Space for iOS and Android is a new option with BlackBerry Enterprise Service 10 (version 10.1.1) that offers customers with a BYOD (Bring Your Own Device) policy, a solution with the best combination of security, user experience, and total cost of ownership. BlackBerry designed Secure Work Space to meet the management, security and cost needs of the CIO, and the user experience and functionality that employees demand. 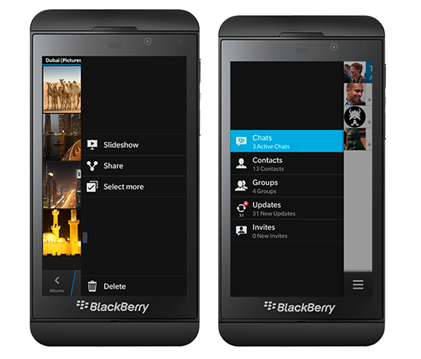