Twitter has shaken up some of the mechanics that govern how developers are able to interact with the social network. The changes come as part of what is seen as an overhaul of the firm's Application Programming Interface control program.

Reports suggest that any newly developed application that wants to be able to serve a user base of more than 100,000 individuals must now seek the company's "explicit permission" before it can operate as intended. 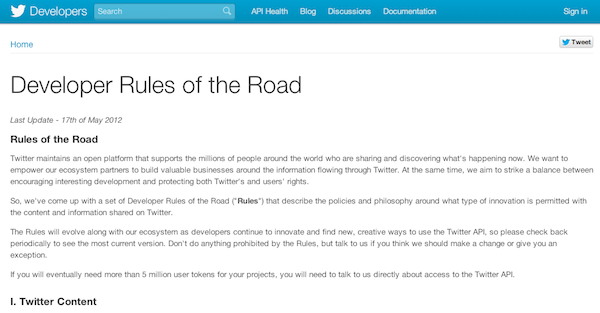 Twitter has justified the changes it is making on the basis of the company's aims to "deliver a consistent Twitter experience" for all users. Applications already boasting in excess of 100,000 users will now be permitted to expand their user base by a factor of 200% before having to return for approval to Twitter.

Director of consumer product Michael Sippey has explained that version 1.1 of the Twitter API will require authentication on every API endpoint, feature a new per-endpoint rate-limiting methodology, and also include changes to Twitter's "Developer Rules of the Road", especially around applications that are traditional Twitter clients.

Click here to see Twitter's Developer Rules of the Road.