There's more from the Wolfram blogging team this month. After the recent news of a new version of Mathematica (Online) that is accessible through any modern web browser (with no installation or configuration required), we hear that in the Wolfram Language, a little code can go a long way. This means that even "programs the length of a Tweet" can do things. So then, Wolfram is launching Tweet-a-Program.

"Compose a Tweet-length Wolfram Language program, and tweet it to @WolframTaP. Our Twitter bot will run your program in the Wolfram Cloud and tweet back the result," wrote Stephen Wolfram himself.

We'll run the code in the Wolfram Cloud and tweet back the result, agrees the team, whether it's a simple evaluation, a dynamic graphic, or a full application.

Wolfram shows off an example of a 78-character program that generates a color cube made of spheres:

According to Stephen Wolfram, the Wolfram Language not only knows how to compute π, as well as a zillion other algorithms, "it also has a huge amount of built-in knowledge about the real world. So right in the language, you can talk about movies or countries or chemicals or whatever."

Programmers can make their code even shorter if they use some free-form natural language in the program.

In a typical Wolfram notebook interface, you do this using CTRL + =, but in Tweet-a-Program, you can do it just using =[...]:

There are many kinds of real-world knowledge built into the Wolfram Language, including some quite obscure ones, such as a map of all the shipwrecks it knows in the Atlantic.

He suggests that one thing that's important about the Wolfram Language (that it shares with ordinary human languages) is that it's not only writable by humans, but also readable by them. There's vocabulary to acquire, and there are a few principles to learn — but it doesn't take long before, as a human, one can start to understand typical Wolfram Language programs. 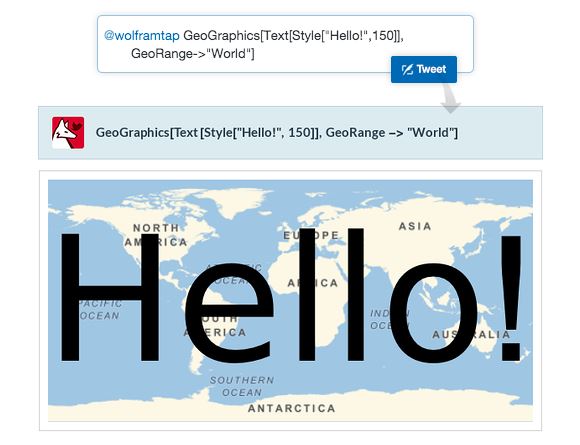