Highlights include Export Assembly to Project and BAML decompilation

JetBrains has confirmed that its developer team is taking a momentary breather and that its free .NET decompiler dotPeek 1.1 is now ready. This final 1.1 release includes the (apparently much demanded) Export Assembly to Project function to enable saving decompiled assemblies as Visual Studio projects.

An Exploring Projects in Assembly Explorer function will also feature to allow developers to browse projects (.csproj files) and everything that's included in them after generating the projects from decompiled sources.

NOTE: .csproj is a Microsoft Visual Studio .NET C# project file extension that holds data relating to all the files and assemblies included in that project, as well as the GUID and version.

Also here is BAML (Binary Application Markup Language) decompilation so that if a user has a compiled WPF app, they will be able to easily look at its XAML UI definitions.

According to JetBrains, "Multiple decompiler improvements including better support for async methods and lambdas, LINQ expressions, and field-like events."

From the entire list of fixes and improvements made in version 1.1, we also note Go to everything, which also features in the firm's ReSharper 8. This navigation command enables navigating to either file, symbol, or type within one menu.

Bookmarks have also made their way to dotPeek from the ReSharper productivity and code refactoring plug in. In addition to the .msi installer, dotPeek is now also distributed as 32-bit and 64-bit executables, which supersede the previously available .zip archive distribution. 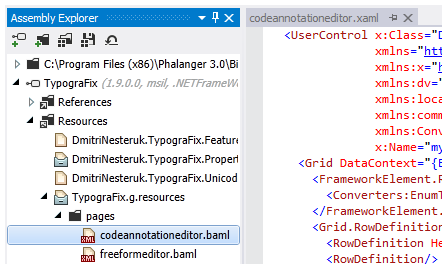