Microsoft has just announced the release of the new Azure SDK 2.2 with support for Visual Studio 2013 through an informal but technically extensive blog post. Scott Guthrie, who is corporate vice president in the Microsoft Developer Division, explained that this new version of the SDK is intended to help developers target Azure for every function from creating, configuring, debugging, deploying, and diagnosing cloud services.

Newly ramped up here is the Azure Remote Debugging capability, which enables a live debugging session with a remote service hosted in Azure itself. This works whether the deployment is a website, a cloud service, or an application hosted in a Virtual Machine.

"Remote Debugging for Windows Azure brings all the power provided by Visual Studio for debugging local applications to the cloud, making it the perfect tool for developing and troubleshooting remote services," says Guthrie.

Microsoft is also talking about the new "Integrated Sign In" function to enable interaction with any service associated with the developer's Windows Azure subscription. Developers can enter their credentials into Visual Studio to start publishing web apps and cloud services, use Windows Azure diagnostics, plus interact with their Windows Azure services through the Server Explorer.

According to Guthrie, "Integrating authentication this way (i.e., end-to-end) across the Service Management APIs + Dev Tools + Management Portal + PowerShell automation scripts enables a much more secure and flexible security model within Windows Azure, and makes it much more convenient to securely manage multiple developers and administrators working on a project. It also allows organizations and enterprises to use the same authentication model that they use for their developers on-premises in the cloud. It ensures that employees who leave an organization immediately lose access to their company's cloud-based resources once their Active Directory account is suspended." 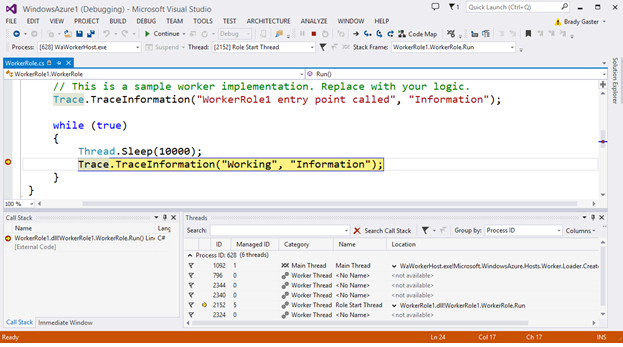 Gutrie also explains that, now, Microsoft will enable a security firewall around SQL databases hosted within Windows Azure. This move has been taken to ensure that only a developer's particular application (or IP addresses you approve) can connect to them and helps make your individual infrastructure secure by default.

"This is great for protection at runtime, but can sometimes be a pain at development time (since by default you can't connect/manage the database remotely within Visual Studio if the security firewall blocks your instance of VS from connecting to it)," said Guthrie. "One of the cool features we've added with [this] release is support that makes it easy to enable and configure the security firewall directly within Visual Studio."

Also in this update:

"Windows Azure enables you to script and automate a lot of tasks using PowerShell. People often ask for more pre-built samples of common scenarios so that they can use them to learn and tweak/customize. With this in mind, we are excited to introduce a new Script Center that we are launching for Windows Azure," said Guthrie.

The Microsoft VP also notes that programmers can learn about how to script with Windows Azure with a get started article.