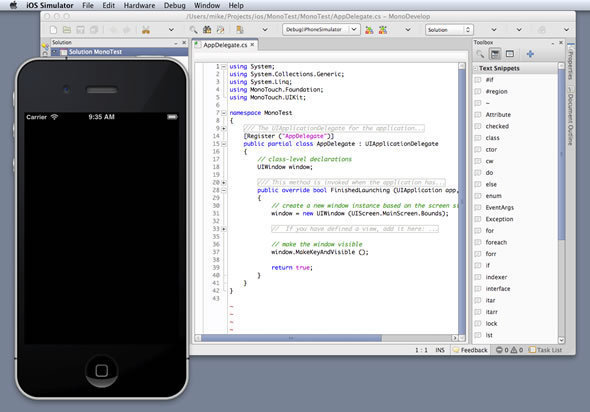 What a history MonoTouch has had in its three-year existence! Initially developed at Novell before the Attachmate buyout, MonoTouch was migrated to a new company, Xamarin, by Miguel de Icaza and his team of developers when Novell/Attachmate jettisoned MonoTouch from its catalog. Then, there was a period during which the fate of MonoTouch was most uncertain because Apple briefly rejected iOS apps that were built with anything other than Xcode. Through it all, Xamarin held firm to its belief that MonoTouch offered C# and .NET developers a far easier path to iOS application development than the alternative of learning Objective-C and the CocoaTouch framework. To be frank, .NET developers using MonoTouch still need to learn those things, but MonoTouch gives them a significant advantage by enabling them to use a known language and familiar building blocks (LINQ, events, delegates, etc.). In addition, MonoTouch offers true garbage collection, a feature that Objective-C developers still have to contend with in certain versions and situations.

The MonoDevelop IDE is adequate for coding, though it's no Visual Studio or even Xcode IDE for that matter. But it has enough of the basics to get up and running quickly. In addition to installing MonoDevelop and the MonoTouch add-on, developers also need to install Xcode running on a Mac. If you want to deploy MonoTouch apps on an iPhone, you will also have to pony up to pay Apple's annual developer program fee for a signed app provisioning certificate. Given that overhead, some developers might ultimately decide that they need to bite the bullet and learn Objective-C and native iOS development. But for C# developers who haven't the time or the inclination, but still need to convert their corporate or customer-facing apps to the iOS platform, MonoTouch offers a less-painful alternative to the Apple way.