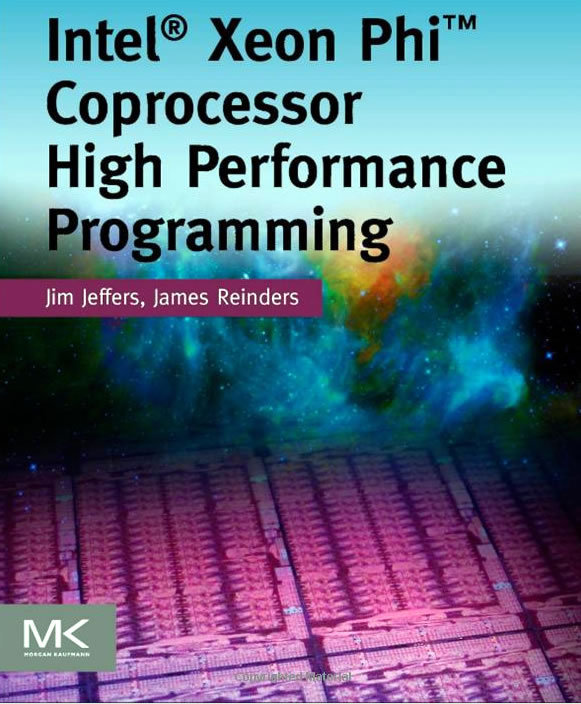 by Jim Jeffers and James Reinders

Intel coding evangelists Jim Jeffers and James Reinders have completed a new book on programming the Intel Xeon Phi Coprocessor — a topic on which we are currently running a tutorial series. The authors have spent much of the last two years educating customers about the prototype and preproduction Phi hardware, so they are uniquely experienced in software development for this new silicon. As a result, this book is the definitive programming reference for the 60+ core monster from Intel.

It starts off by reassuring the reader that much of the benefit of the new chip can be obtained using conventional parallel programming techniques (vectorization, OpenMP-style compiler directives, and so forth). The back half of the book gets into the programming that is more chip-specific. The first topics in these later chapters will be familiar to users of GPU products: reducing the latency of data transfers, optimal threading models, and the like.

Finally, the authors address Phi-only kinds of considerations, such as data locality on the processor, configuring the Phi in various imaginative ways, using the Phi in Linux clusters, and so on. The text is highly readable and interlaced with lots of code examples in C and Fortran.

My only reservation about the book is that it focuses almost entirely on writing green field code for the processor. And it relies heavily on technologies that Intel has long favored, namely OpenMP, Threading Building Blocks (TBB), and Cilk. I would have liked to see consideration given to running existing programs that use Boost threads, Pthreads, or Java threads; and discussion of what changes would need to be made for them to run well on the Phi.

But this is a small complaint, given the extensive and unique information about the processor that is presented here. This volume is certainly the definitive title on the subject and considerably more approachable than the technical literature Intel has released about the Phi. Highly recommended.

(Adrian Bridgwater contributed to this review.)