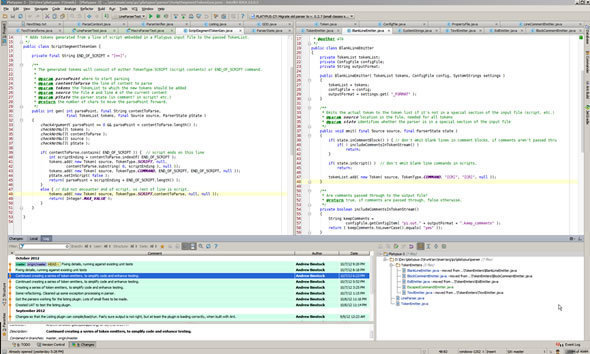 JetBrain's IntelliJ IDEA has long been a most deeply loved Java IDE. For much of its lifetime (I've used it since release 3.0, so I can't speak to earlier times), it has been at the vanguard of all IDE development, regardless of language or platform. That it has been able to maintain, even thrive, in a sector in which all its major competitors are available for free is a testimonial to the quality of implementation and the speed with which JetBrains integrates new Java technologies. Think of a Java package or tool that suddenly became popular — GWT, Spring, Groovy, JDA, the open-source servers, Android, and so on — and you'll find that IntelliJ was always the first to support them. And it maintained its lead with more and better features, when competitors finally climbed on board with their own products.

The 12.0 release of IntelliJ shows that the pace of innovation continues unabated. This release adds an Android UI designer, faster compiler, support for the Play Framework 2.0, support for announced Java 8 features (including code assistance for lambda expressions, method references, and default methods). It also adds many new features to its Groovy capabilities, including enhanced support for Cucumber testing.
And its Web technologies continue to be extended. It was one of the first IDEs with a JavaScript debugger. In this release, it adds more Node.js features as well as support for Google's Dart language. Finally, in terms of VCS products, it has added support for TFS 2012, which complements its existing support for Subversion, Git, Mercurial, and Perforce. I use the first two of these options and find that they are completely integrated into the UI. You can manage the check-ins, diffs, and merges all from within the IDE. In the image above, the lower left window shows the history of commits and pushes on a Git-based project. It includes clickable entries that reveal the actual diffs and code additions and deletions. This is deep integration.

For once again improving on its remarkable track record of feature development and its history of frequent upgrades, IntelliJ IDEA 12.0 wins this year's Jolt Award for coding tools. Congratulations!