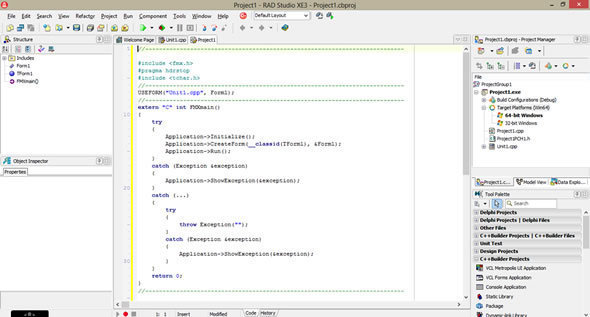 The just released RAD Studio XE3 is an unusual combination of technologies. In its simplest form, it's an IDE that supports projects written in Delphi, C++, and/or HTML5. It provides cross-platform development for Windows (32- and 64-bit), and Mac OS X (Mountain Lion and later), as well as iOS. It is the only IDE at present that enables C++ development on the major client-side operating systems. It delivers much of this portability by bundling its own high-quality UI libraries with the IDE. In addition to C++ and Delphi, RAD Studio XE3 delivers an HTML5 builder that enables quick development and testing of HTML5 apps and their counterparts on Windows 8 and mobile. The enterprise edition of the product provides deep database integration with the ability to recognize, connect to, manipulate, and even reverse-engineer records in Oracle, DB2, SQL Server, Sybase, MySQL, SQLite, and Embarcadero's own Interbase. It further extends these capabilities to data stores in the cloud, notably on Amazon AWS and Microsoft Azure.

Finally, this product includes a set of features sorely missing in many other IDEs: extensive support for building and modeling applications — including design tools and UML modeling.

Our only concern with the product is that the C++ Builder generates only native code on Windows platforms. It does not currently work with .NET, which is an important limitation. (In contrast, the Delphi side of the product does indeed integrate with .NET). However, if that is not a constraint for you, this new release is an impressive amount of high-quality software.

Clarification: "Our concern that C++ Builder generates only native code on Windows" might be misunderstood. C++ Builder can generate binaries for Mac OS X as well. But for Windows targets, it's native code only.