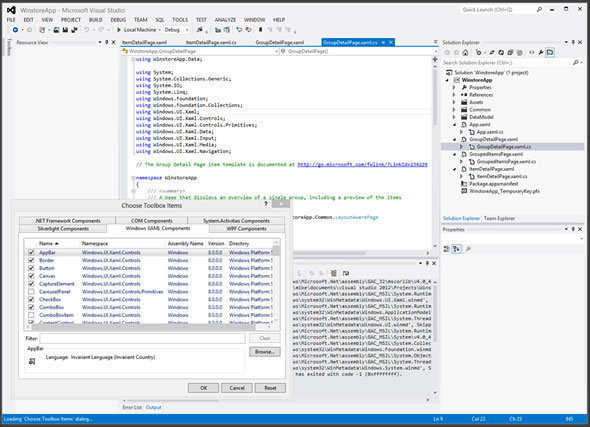 From the long-ago moment that Microsoft made the innovative leap to merge the coding environment of many different languages (C++, Visual Basic, HTML, SQL, etc.) into a single IDE, I knew this was going to be a game changer in the software industry. Nearly 15 years later, this melding of technologies into a unified experience still works effortlessly. While there have been some creative diversions along the way (here's looking at you, Silverlight), these necessary steps helped push the product into the future and paved the way for technologies at the heart of Windows 8.

Besides being the developer embodiment for Windows' technology strategy, Visual Studio has grown up with the software industry to extend into sophisticated software design and collaboration, lifecycle, and change management systems. The 2012 edition shows off all these and other key coding attributes with polished maturity. The all-important look and feel of the IDE has adopted the new Windows 8 flat, hard-edged graphic appearance that makes it much more crisp and neat compared with earlier releases, such as Visual Studio 2008, which seemed to look a bit too mushy and spongy in my eyes. The 2012 release imbues this design aesthetic into the new Windows 8 and WinRT applications it helps create — all the traditional UI controls that developers have worked with for years now look brand new. Yet even with these changes in its outward appearance, VS2012 still retains its efficient workflow, giving you everything you need within a few mouse clicks or keyboard accelerators without ever getting in your way. Even though my fellow judges did not come to the same conclusion, I believe Visual Studio IDE is the best software development environment in the world, and VS2012 has further solidified this conviction.