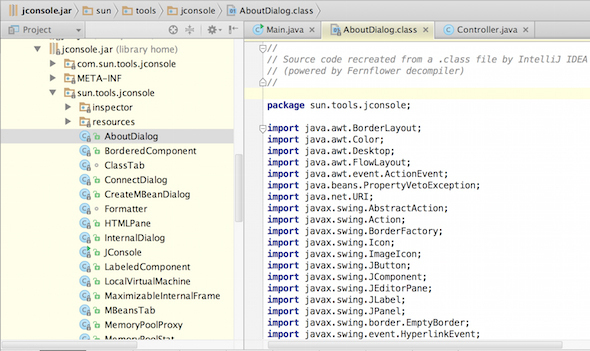 Java 8 added numerous features to the language, including support for lambda expressions. To say that developers find all but the simplest Java lambdas complex to use would be a fair assessment. To their aid rides IntelliJ IDEA 14, which updated both the Evaluate Expression and Watches features to evaluate lambda expressions and anonymous classes.

The addition of this feature follows a predictable formula: Whenever there is something new in the Java world, IntelliJ IDEA enhances its existing capabilities to make developers productive with the new language features.

But the improvements are not confined to language-driven enhancements. Even basic capabilities are revved between releases. For example, the new built-in decompiler for Java classes makes it easy to look inside libraries without the source code. In addition, when stepping through code in the debugger, the value of variables now are show in light gray text right beside the variable in the debugging window. There's no need to find the variable in a separate window! The support for high-DPI displays makes the text crisp and clear.

IntelliJ IDEA 14 supports many other programming languages and it includes numerous plug-ins to extend its excellent features to popular and growing development stacks, such as Node.js and Express, and Scala and Play.

The IDE also added support for Apache Cordova and the new Google devices included in Android Studio, such as Android Wear devices. IntelliJ IDEA 14 makes it easy for Java developers, who are big fans of the IDE, to work on other programming languages and development stacks that are becoming increasingly popular. However, as happened in previous versions, you will have to spend some time tinkering to fully understand how to take advantage of all the power of the IDE because the documentation has yet to show significant improvements.

Other than that one complaint, IntelliJ IDEA is the IDE to use for Java or any JVM language. There really is no alternative that comes close to IDEA's elegance and feature set.