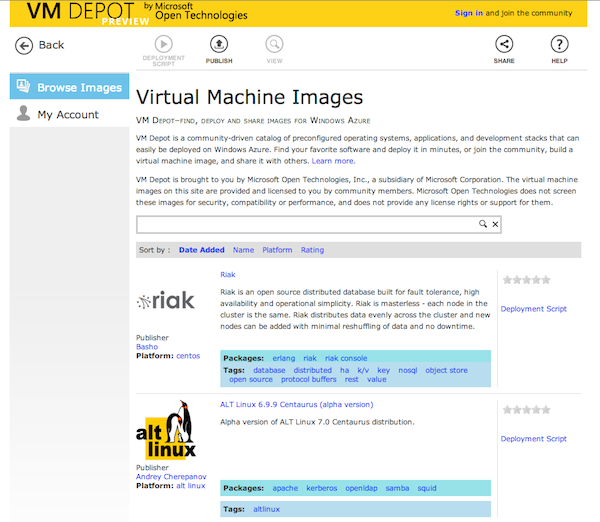 Microsoft Open Technologies has developed its open source focused subsidiary division to the point where it can now offer a public preview of its app store for Windows Azure. Known hereafter as VM Depot, this resource is intended to allow developers to construct, deploy, and share Linux configurations, create custom-made open source stacks, collaborate, and build new architectures.

The wider goal supports Microsoft's intention to push more open-source applications forward (running on Linux) as guest inhabitants on the Azure cloud service. Reports suggest that although Microsoft already operates a store for Azure with a defined developer focus, this development with VM Depot is perhaps more similar to what Amazon Web Services is doing with the Amazon Machine Images service.

The preview launch of VM Depot is an introduction of things to come: You can already easily deploy different Linux-based virtual machines that include custom and curated installations and configurations. We have the latest, full-fledged distributions of Debian, Alt Linux, and Mageia for your hacking pleasure," said Gianugo Rabellino, senior director of Open Source Communities at Microsoft Open Technologies.

Rabellino goes on to suggest that developers should grasp the chance to use the service, make comments, and rate the free offerings that exist on the portal. He also encourages programmers to "rate and remix" them to their own liking — and then of course share results with other members of the community.

"Or why don't you go ahead and just create a new one from scratch with your favorite software? For ultimate speed, you can quickly deploy images already customized for specific business scenarios," he enthused.

As complex as it may seem, Microsoft insists that VM Depot was "relatively easy to build" as it relies exclusively on published Azure APIs. The firm finishes by saying that VM Depot is another illustration of how the Azure platform is "effectively open" in it nature.