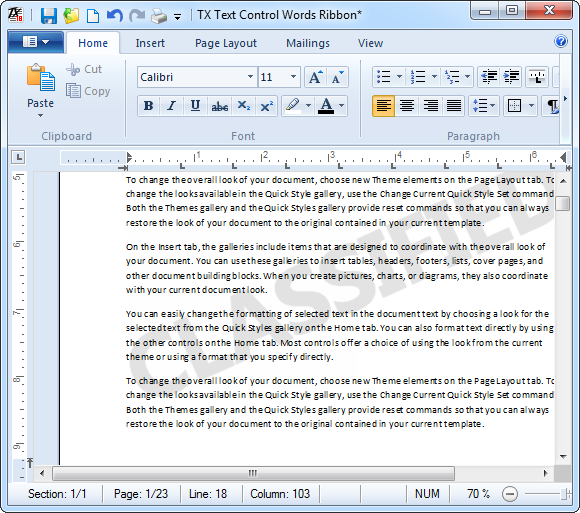 So now, TX Text Control X8 introduces a new z-order of objects (text frames, images, or charts) where each object — be it a text frame, image, or chart — can be layered above or below any other object. These objects can be either in front of the text or behind the text; the development team behind this technology says that this feature was added to allow support for background images.

With the release of TX Text Control X8, the PDF import function has been improved so that PDF Reflow is no longer a problem. The PDF import filter that ships with TX Text Control .NET X8 enables developers to import and convert complex page layouts into editable word processing documents.

TX Text Control X8 ships with a status bar, which now includes a zoom slider. By moving the slider, you can change the zoom level of the current document. This slider also reflects the current zoom factor, if it was adjusted programmatically or using the mouse scroll wheel.

The TX Template Designer has been merged with TX Text Control Words. The resulting application, TX Text Control Words, has been updated with a Ribbon interface. In addition to its own feature set, the application now includes all the functionality of TX Template Designer plus a number of new features: charting, mail-merge, and a new style and icon design.